Heart and passion are always in the mix when you play a rival team. The Huskies and the Sailors proved that in their first matchup in Steamboat where the game was decided in overtime, in Steamboat’s favor.

Fast forward to Friday night in Edwards, game tied at 1-1, with the clock counting down in the second overtime, both teams clawing for a win. With just a few seconds left, the Huskies threw everything they had at the Sailors in what would be the final set play of the game, a corner kick. 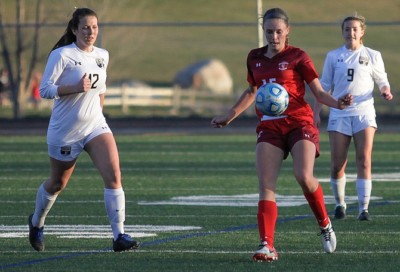 Steamboat’s Delaney Moon gets ball control against Battle Mountain on Friday in Edwards. The Sailors lost in double overtime, 2-1. – Photo By Chris Dillmann

How did we get here?

Mallory Skidmore to Claire Krueger put the Huskies on the board in the 11th minute on a corner kick to gave the Huskies a 1-0 lead. The Sailors’ Katy Floyd assisted Delaney Moon on a counter attack midway through the second half for the equalizer.

The tying goal was indicative of the heart the Sailors have played with all season. In coming back, the Sailors have shown the resolve of a much more seasoned team and although the standings have not shown the results the Sailors would have wished for, the measure of the players can be seen in training and on the field each day.

“I told (the team) that they’re resilient as hell,” Sailors coach Rob Bohlmann said. “You go out every day. You work. You prepare. You train. You look to get better every day. That’s no different. You always measure a lot of different things before you measure the scoreboard. Ultimately, you do measure the scoreboard. Right now, you see some special things about the character of our group.”

With the final corner of the game, Battle Mountain goalie Jordan Glendenning pushed forward into the Sailors’ 18-yard box. She would find the ball and put it in the back of the net with just two seconds left, leaving no time in the game for the Sailors to find redemption. It is rare for a goalie, still in their keeper jersey and gloves, to score, and even rarer for that score to be an overtime game winner. Unfortunately, on this night, it was at the Sailors expense.

With the loss, the Sailors move to 3-5 in Western Slope League play and 3-7 on the season but don’t look to the scoreboard for the measure of this Sailor team. Their character, composure, heart, and teamwork continue to grow each day, and that is the true measure of a team.

Story by Casey Barnett. You can reach Casey Barnett on twitter @caseypbarnett or by email at casey@seeme-media.com.