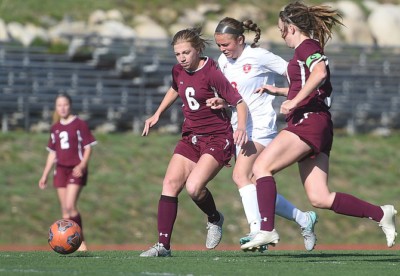 Steamboat’s Eli Roach tries to fight through a pair of Palisade defenders Monday. The Sailors went on to lose the game, 4-1. Photo by Joel Reichenberger

An explosive second half from Palisade sent the Steamboat Springs High School girls soccer team to a 4-1 defeat on Monday.

It was the team’s fourth consecutive loss and pushes the squad into what is unknown territory for the program. The Sailors haven’t ever lost four in a row under coach Rob Bohlmann, who started coaching the girls’ team in 2002.

Monday, the team stayed confident and positive after a close game slipped into a bigger loss late in the second half.

“We have really improved playing together the past couple of games,” junior Keelan Vargas said. “We’ve had a rough couple of games, but I’m really proud of the way we played today.”

For most of Monday’s game, the Sailors did match Palisade step for step, especially on the defensive end of the field. With starting goalie Leah Rowse out with an injury, freshman Eden Reese stepped up and produced several spectacular saves behind a underclassman-heavy defense that closed up well against one of the region’s best offenses.

The cracks started to open in the second half.

Palisade senior Emma Mueller scored in the 44th minute. Sami Feller scored two in the second half for Palisade, and junior Christina Chatfield scored as well.

Steamboat did manage an answer to that first goal, knotting the game at 1-1 for about 10 minutes in the second half. Vargas got a free kick off a foul from about 35 yards out and launched a high, arching strike at the goal.

Her shot soared over the defenders and came crashing back down just in front of crossbar and just above the goalie’s fingertips.

“I really like shooting from distance, so when we got that free kick, I knew I wanted to take it,” she said. “I thought, ‘I’m going to put it in the net.’”

That was it for offensive highlights, however.

The Sailors possessed the ball and could work it up the field, but they were consistently lacking just a little bit of polish — the one or two sharp passes that separate a fine possession from a true scoring opportunity.

“A big thing we’ve been working on is linking the defensive line to the midfield, midfield to the forwards,” said Steamboat assistant coach Erin Early.

Steamboat’s been dramatically outscored in its last four games, 17-2, including two 6-0 shutouts.

It hasn’t gotten any break from the schedule. Three of those games were against the top three teams in the league. Palisade is now 6-1 on the season and sitting atop the Western Slope.

The other was one of the 6-0 games against Lewis-Palmer, defending state champs and currently ranked No. 3 in Class 4A.

“They’ve had a lot of good opponents they’ve had to play in a row, and they’ve responded with immensely great character,” Early said. “We didn’t get the result we wanted, but truly, as coaches, we could not be more impressed with the strides these girls are making.”

The road doesn’t get easier soon.

Steamboat, 3-6, will travel Friday to play at Battle Mountain, 4-5.

The Sailors were at their best in getting an overtime win against the Huskies last month, but Steamboat will have its hands full as it plays for the sweep. After starting the season 0-5, Battle Mountain has won its last four games, beating Palisade, Glenwood and Eagle Valley, currently the league’s top three teams.

For now, the Sailors are just trying to stay positive, and despite their uncharacteristic losing streak, they’ve managed that.

“Even though we didn’t win, these are my favorite games. They definitely show much this team loves each other,” Vargas said. “We want to come out and turn this little streak around. Everyone on this team is ready to work hard to make this happen.”