Palisade capitalizes early against the Sailors 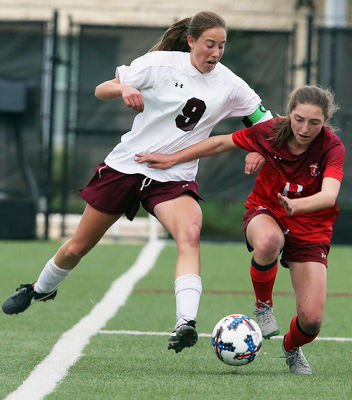 The Steamboat Springs Sailors have seen challenges all season. After a long stint of games that the Sailors came up on the short end of the scoreboard, the game against the Western Slope League-leading Palisade Bulldogs (7-1 heading into the night) was one the Sailors wanted to prove themselves in. With a heartbreaking last second overtime loss to Battle Mountain still in recent memory, Steamboat was out to prove that there was more to their young team than just the season record (5-7 heading into the night). Tonight would be a true measure of the grit of the Sailors.

It would be Palisade’s Sami Feller who, 10 minutes in, would take advantage of her scoring opportunity. Her shot from 20 yards away off a pass from Emma Mueller skipped across the Walker Field turf and into the arms of Leah Rowse, but it rolled up and over her body and slowly rolled into the net before the Steamboat goalkeeper could recover. The early goal by Palisade put Steamboat in a familiar situation, needing to find the heart to push hard and come back.

Steamboat had a chance at an equalizer eight minutes later when freshman Katy Floyd got behind Palisade’s defense for a breakaway opportunity. She kicked the ball too far ahead, however, and Cordova slide-kicked the ball away while halting Floyd’s run on the net to end the threat.

A direct-kick shot from Steamboat’s Delaney Moon was knocked away from Baskin and cleared on the right side of the goal box by Feller in the 48th minute. Twenty-three minutes later, Moon got another direct kick chance from nearly the same spot when Baskin arm tackled Steamboat’s Lucy Wilson — drawing a yellow card — in front of the goal box while going after the ball. Moon’s shot, however, hit Palisade’s defensive wall.

Feller would capped the scoring, with a shot from 25 yards out that skipped past the outstretched hands of Rowse, off the goal post and into the net with a little more than four minutes remaining proving to be the final goal of the game giving Palisade the 2-0 win over the visiting Sailors.

After the loss, the Sailor coaches reflected on the game. “We had some great attacking opportunities, and defended as a unit,” said Sailors assistant coach Erin Early. “Things fell into the right place tonight, it was some of our best consistent soccer of the season.”

Palisade’s Coach agreed. “They’re very well organized and very well coached, and it took a while for us to really break through their defense,” Palisade coach Tim Hofer said. “The first half we struggled to get through.”

Coach Rob Bohlmann is proud of his team, even after the 2-0 loss. “It was a heroic effort by our team tonight. Overall, our plan going into the game was to be much more attack oriented that the first leg verse Palisade. It paid off dividends, as we had lots of opportunities. In the second half, the girls created constant attacking moments; some of the best we have seen all season. You could see it in the walk the girls had coming off the field, they were extremely proud of not only their efforts but their performance.”

The Sailors are heading into spring break next week and looking to keep the positive vibes in camp continue. “Our approach to Spring Break is to rejuvenate the mind body and soul,” said Early. “An emphasis on maintaining game fitness is very important too.”

The Sailors will be refreshed and back in action Tuesday, May 2nd home against Eagle Valley.

Article written by Casey Barnett, with help and photos from Jon Mitchell of the Grand Junction Sentinel.