Edwards — The past three times the Steamboat Springs High School girls soccer team has faced Battle Mountain, the game has been decided by a single goal, and both games last year went to overtime. It’s the type of game that can define a team’s season. 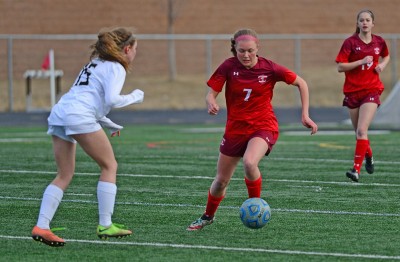 Sailor Sydney Graham looks to beat a Battle Mountain defender in the first half of Tuesday’s game in Edwards. Graham scored in the first half to give the Sailors 1-0 lead and Steamboat went on to win the game 2-1.

“It shows us what we can do and how far we can go this season,” Steamboat Springs junior Lucy Wilson said after the Sailors defeated the Huskies 2-1 in a nail-biter in Edwards on Tuesday. It was the Sailors first win of the season and levels Steamboat’s record to 1-1 just two games into the 2018 campaign.

“I think it changes the whole momentum of the team,” Wilson said. “It was a really big win.”

Steamboat got on the scoreboard about 10 minutes into the first half when sophomore Sydney Graham scored on a hard shot from about 18 yards out after getting a pass from Teagan Ludwick.

The Sailors went into the half with the lead, but it was Wilson’s goal at the 45-minute mark that proved to be the difference. The play started when Izzy Rillos headed the ball to a streaking Wilson. Wilson’s first touch spilt the defenders and she was off to the races. Her goal gave the Sailors a 2-0 lead in the game and proved to be the game-winner.

Battle Mountain made things interesting down the stretch after being awarded a penalty kick outside the 20. 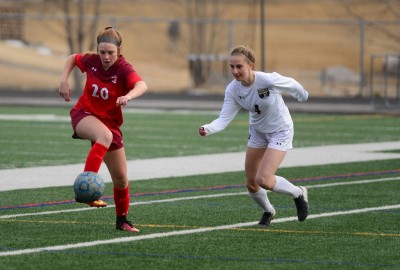 Grace Drobek makes a touch past a Battle Mountain defender in the first half of Tuesday’s game in Edwards. The Sailors won the game, 2-1.

The team’s leading scorer Audrey Teague hit a perfect ball to the side of the goal, and her teammate Claire Kruger came in to finish the job despite the efforts of Sailors goalkeeper, Eden Reese, who slammed into the goal post trying to stop the shot. The goal came at 53 minutes and put the Sailors on their heals for final 27 minutes of the game.

“It was huge,” Steamboat Springs coach Rob Bohlmann said of the team’s effort.”It was something they have been working for since January. We fell short in the opening game, but they kept working and it was great to see them come out and play how we did.”

In the final stretch, the Huskies unleashed the majority of the team’s 14 shots with six put on goal. The Sailors had 10 shots in the game seven of which were on goal.

The Huskies, 1-3-1 this season, were looking to bounce back for a 3-2 overtime loss to Glenwood Springs in the team’s more recent game Saturday.

Steamboat is coming off a hard-fought 3-2 loss to the same Glenwood Springs team in the team’s last game 10 days ago at Gardner Field. The Sailors were scheduled to face Golden on March 16, but the Demons canceled the trip early Friday due to concern over traveling in poor weather conditions.