Sailors hope to stay on track after losing game, captain in opener

There was a little bit of everything Saturday at Gardner Field as the members of the Steamboat Springs High School girls soccer team hosted Glenwood Springs in the first game of the season, but it was not all good for the Sailors. 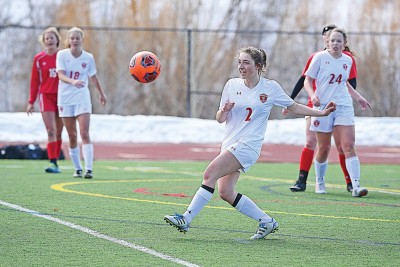 Steamboat Springs senior Teagan Ludwick clears the ball in the first half of Saturday’s game against Glenwood Springs. Steamboat lost the game, 3-2.

The game opened in a spring snowstorm, but by the end of the game it had turned into a relatively warm sunny day in Steamboat Springs. The game featured fast-paced action that included a Glenwood goal in the first 90 seconds, a couple of serious injuries and a penalty kick that secured Glenwood’s 3-2 victory. It also included a strong first half showing from the Sailors, and a determined approach that kept the home team in the game until the final whistle blew.

“We kind of had a 10-minute window, and that was the difference” Sailors coach Rob Bohlmann said. “I really think it was a culmination of what Glenwood did and how they played — it was a really good section of the game for them. We were not able to keep up, or adapt. If we had put together a complete 80 minutes it could have been a different outcome. ”

The Glenwood Springs comeback capped off a wild day of soccer at Gardner Field. The Demons came out strong, and put a ton of pressure on the Sailors from the get-go. Just over a minute into the game the Sailors were struggling to clear the ball when it got knocked into the 6-yard box, ricocheted off of several players in the area. Glenwood’s Eryn Peterson was able to push the ball it into the back with her body for the opening score of the game.

But the Sailors didn’t go away — even after losing team captain and senior Keelan Vargas.

With Vargas on the sideline the Steamboat players seemed to shake off some of the opening-game jitters.

The Sailors first opportunity of the day to score was the result of the Sailors pressuring the Demons defense in front of the Glenwood goal. When the Demons committed a foul inside the penalty area Steamboat junior Delaney Moon made it pay by beating Erin Bucchin to make the score 1-1 just about 10 minutes into the game. Five minutes later, Sailor sophomore Grace Drobek worked the ball through the Glenwood Springs midfield and found a streaking Rachelle Koly who went the distance and beat Bucchin again. The score gave the Sailors a 2-1 lead that lasted the rest of the first half.

But, it was a 10-minute period in the second half that proved to be what the Demons needed to beat Steamboat for a third consecutive time during the past two seasons.

Peterson scored again to tie the score at 2-2, and then Glenwood got a penalty kick after Steamboat was called for a handball. The official on the field awarded a penalty kick and Glenwood’s Devan McSwain powered the ball past Steamboat goalkeeper Eden Reese for what turned out to be the game-winner.

But the score wasn’t the only bad news for the Sailors as the team also came out on the losing side of a physical game with some costly injuries.

Bohlmann said that Vargas is expected to be out up to six weeks after suffering a broken ankle in the game. A Glenwood player ran into her while trying to clear a ball in the first half. Bohlmann also wasn’t as sure about junior Megan Salyer who may have suffered a knee injury in the second half during a battle for the ball with a Glenwood player.

“The most important thing is that we stay on track with what we are doing. We are not looking to reinvent anything,” Bohlmann said. “Our whole approach has been about having the right mentality. We walked away a year ago from that opening game (a 2-1 loss to Glenwood in Glenwood) and it didn’t feel right to any of us — it just wasn’t the right approach. We came into this game and it was a good approach, we played well and it all comes back to those 10 minutes. … The soccer is going to get better, and I’m really happy with our work rate and organization.”

The Sailors will be home for a second straight game when Golden comes to town. The game is scheduled for 5 p.m. Friday at Gardner Field.