FRISCO — The Steamboat Springs High School girls soccer team got two goals from Delaney Moon on Saturday as the Sailors topped Summit High School and improved to 2-1 for season. 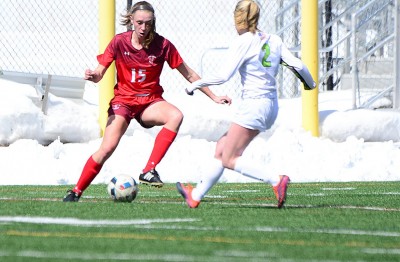 Steamboat’s Delaney Moon netted two goals and had an assist in Saturday’s 3-1 win over Summit in Frisco.
Photo by John F Russell – SteamboatToday.com

“I think we played really well,” Moon said. “We are starting to really work well in the midfield, and that’s helping out our attack.”

It was a test for the Sailors who gave up a goal on a free kick from more than 30 yards out at the 12-minute mark of Saturday’s game in Frisco. But that would be the only goal the team would give up en route to a 3-1 victory. That goal came from Summit’s star senior Tanner McCann.

But Moon said despite falling behind — something the team has limited experience with this season — there was no sense of panic.

“It was still early in the game, so we knew that we could come back,” Moon said. “We knew that if we continued to play the game the way we were, that we would come back. We kept a positive attitude, and I think that really helped us push forward.”

On the sideline, Sailors coach Rob Bohlmann was also happy with what he was seeing from his players.

“It really showed the maturity of the group,” Bohlmann said. “They just kept playing and kept the faith. We didn’t look to make a radical change to our game, and we played with a lot of composure and possession. It would have been very easy to lose that because of the urgency there. ”

The two teams battled in a physical battle for much of the day, and both had opportunities throughout the first half. Summit had 12 shots in the game with five of them on goal. Steamboat would finish with 15 shots in the game and nine of those shots were on goal.

The biggest goal, however, was Moon’s first. It came off her foot 36 minutes into the contest from just in front of the Summit goal. Izzy Rillos assisted her.

Summit has a huge opportunity to regain the lead with more than two minutes remaining in the first half. This time on a corner kick that was headed toward the goal, but the ball bounced off the crossbar and the Sailors were able to clear it. The teams left the field at halftime tied, 1-1.

Summit was aggressive in the early minutes of the second half, as once again the two teams traded opportunities to take the lead. Once again, it was Moon cashing in — this time in the 72nd minute after getting a pass from teammate Grace Drobek.

The shot put the Sailors up 2-1 and proved to be the game-winner. Kelly Petix added another goal in the 80th minute on a corner kick by Delany Moon.

The win puts the Sailors in second place in the Western Slope Standings, a game behind Glenwood Springs at 3-0 and half a game ahead of Battle Mountain, 2-2. Summit drops to 2-3 followed by Eagle Valley 1-2.

Steamboat and Summit will meet again Tuesday in Steamboat Springs. The junior varsity teams will take the field at 4 p.m. followed by the varsity at 6 p.m.

“In the first half of the season, things have been super, super tight,” Bohlmann said. “It’s hard to tell if it is going to stay that way, it really is. We could get to a certain point, and it could open up, or it could be like this.