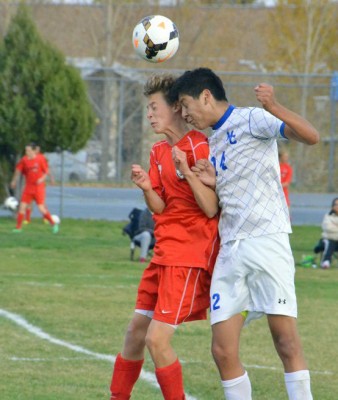 It wasn’t easy, but the Sailors were able to close out the 2014 regular season with a 2-0 victory over Moffat County. The Bulldog defense and senior goalkeeper Alex Arellano held Steamboat scoreless in the first half and Arellano recorded 34 saves over the game. The Sailors finally broke through the staunch defense in the 54th minute when Jack Salyer was able to find the back of the net. The Sailors added another goal in the 66 minute when  Devin De Jong was able to find Hector Lopez for the final goal of the game.

“The goals didn’t come easily for us, but we were able to crack it with some good flank play,” Steamboat coach Rob Bohlmann said. “We wanted to end on a positive note.”

The Sailors now await the the Playoff picks from the Colorado High School Athletic Association to find out if 3rd place in the very tight Western Slope is enough to have a shot at the playoffs. Steamboat (9-5-1) is lead in the league by 2nd place Battle Mountain(9-5-1) and Summit(13-1), who is ranked currently at 6th place in the State.