Steamboat Springs — The Steamboat Springs High School girls soccer team didn’t get a ton of chances Friday afternoon, but it took advantage of enough of them, then again leaned on a strong defensive effort and on a few outstanding plays from goalie Ocoee Wilson. 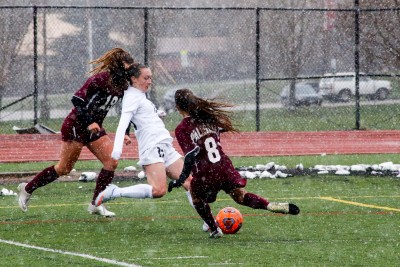 The Sailors beat Palisade, 2-0, winning at home in the rain and snow to take a major step toward winning at least a share of the Western Slope League championship.

“That was huge,” Steamboat coach Rob Bohlmann said. “It was definitely really special.”

“Our biggest challenge coming into it, we really had not found the rhythm after being back from Spring Break, and tonight, it was about the hard work, the tenacity, and the desire,” Bohlmann said. “As we continue to press on, we’ll find our rhythm again.”

First up is a game at 11 a.m. Saturday against Delta, 3-10 this season. The Sailors travel to play Battle Mountain on Monday, then are back home again against Eagle Valley, 4-6-2, on Thursday.

With all due respect to the team’s “one game at a time” mantra, the big one on the list is Monday’s battle against the Huskies. Steamboat won that matchup last month at home, 5-0, but Battle Mountain’s been red hot ever since, winning its last six games to build a 10-2 overall record and a 9-1 league mark. Monday’s game, Steamboat’s third in a four-day span, could either guarantee Steamboat the outright championship or drop the teams into a tie.

Friday, the Sailors got a win they needed against Palisade, which, to this point, has proven to be the league’s third best team, having lost only to Steamboat and Battle Mountain.

The Bulldogs couldn’t ever reliably turn control of the pace of play into good shots on goal, and Wilson was there to scoop up the attempts they did get through.

On the other end, Steamboat scored once in each half.

The first goal came from Natalie Bohlmann, who tracked down a long pass to get a shot from 10 yards out. She put it high and away for her eighth goal of the season.

Wilson also came up with a certain goal save, that may have changed the tide if not for her huge over the head tip of the ball.

Mackenzie Gansmann scored her ninth of the season midway through the second half, taking a pass from Bohlmann, then hammering a shot from 15 feet that, in a persistent second-half snow, squirted through goalie Reannon Baskin’s hands.

“We just had that magic as a team,” senior Logan Sankey said. “We were working well as a team, working with each other, really quick 1-2 passes and just combining well to get to goal.”