STEAMBOAT SPRINGS — A slow start and an unlucky bounce in the closing minutes of Thursday’s Steamboat Springs High School boys soccer game against Summit County proved to be costly for the home team, as the Sailors fell in a 3-2 contest. 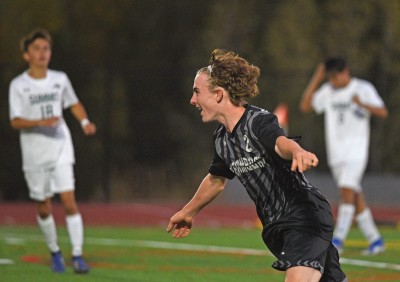 Steamboat Springs senior Oliver Capparelli netted two goals, including one in the second half that put the Sailors up 2-1, in Thursday’s game against Summit County. An unlucky bounce on a goal kick with just over 5 minutes allowed Summit’s Maschelle Kepple to score his second goal of the game and give the Tigers a 3-2 victory.
Photo by John F. Russell

“You know that the first half just simply was not good enough, and you know, they knew it,” Steamboat head coach Rob Bohlmann said of his team. “The lack of consistency for 80 minutes is what killed us. They were tremendous, and we congratulated them for the turnaround and coming out to play in the second half. Of course, you have the peaks and valleys throughout the game, but if we would have brought that in the first half, you know, it would have been a different game.”

Summit took the upper hand early during the game at Gardner Field when Ranger Stone was able to make a run behind the Sailor defense before sending a crossing pass to the foot of Maschelle Kepple who found the back of the net. The goal gave the Tigers a 1-0 lead just four minutes into the game.

Summit put nine shots on goal in the first half. The Sailors also had opportunities, earning four corner kicks and just missing a chance to tie the game on a breakaway near end of the first half.

But neither team would find the back of the net, and the first half ended, 1-1.

Steamboat senior Oliver Capparelli said the Sailors went into the locker room at halftime knowing they would need to pick up their game.

“The coaches left us alone because they knew that we needed to get it together at a team. So, the captains stood up because we needed to get the team more motivated,” Capparelli said. “We knew that we had to come out and prove the scoreboard wrong, so coming out the second half, we were super pumped, and we knew that we could stretch it out — that’s what our team does.”

That’s exactly what happened on the Sailors first goal of the game. Kevin Kaster sent a long through ball behind the Summit defense, and Capparelli was able to catch up with it and fired a hard show past Summit keeper Chris Lopez to make the score 1-1, just a few minutes into the second half.

The goal fueled a Sailors rally, as just a few minutes later Capparelli would collect his second goal of the game and give Steamboat a 2-1 lead. This time Kaster switched fields deep in Summit’s end and found Capparelli wide open at the top of the 18.

But Summit came back in the 66th minute when freshman Owen Gallo slipped a pass to sophomore Alan Casillas who fired a shot in the back of the net to tie the game, 2-2.

The two teams looked as though they were headed to overtime. However, a long goal kick from Lopez turned the tide of the game in the closing minutes. The ball took a hard-to-handle bounce, and Summit’s Kepple got just enough on it to get it past Axel Kovach who had come out to play the ball. The ball rolled into the back of the net for what turned out to be the game winner.

Both Steamboat and Summit came into Thursday’s game in need of a win. The Sailors fell to 1-5 this season, having lost tough games to Rifle (3-2), Glenwood Springs (1-0), Eagle Valley (4-2), Battle Mountain (5-0) and now Summit. The Sailors only win of the season came against Palisade on Sept. 7.

On the other side of the field, Summit lost its first three games against Delta (1-0), Salida (2-1) and Battle Mountain (5-0). The Tigers’ wins came in a 5-4 game against Palisade and the tight game against Steamboat.

“The key thing is that it’s all now about the second half of the season,” Bohlmann said. “We have Wheat Ridge on Saturday in a nonleague game, and then we get to do the league table a second time. So, it’s about taking positive steps forward and getting stronger every day.”