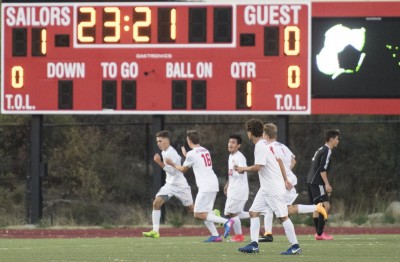 Teammates congratulate Murphy Bohlmann after he scored his second of three goals in a game last month. – Photo By Joel Reichenberger

The “record” is 23 goals but the quotation marks are important.

Steamboat Springs High School soccer coach Rob Bohlmann isn’t actually sure what the school record is for goals scored during a season, and he isn’t sure if his son, junior Murphy Bohlmann is one goal away from equaling the actual record or 10.

Stat keeping has become much easier in the last decade as coaches have been encouraged to use the website MaxPreps.com, which tracks a team’s win-loss record and the stats for individual players.

“I’m not a great statistician but the rumor goes back to Mac Noel, who said he had the school record at 23,” Rob Bohlmann said. “You’d really have to go back through the years for some other guys, a lot of goal-scoring personalities, but 23 is what Murphy heard.”

If it’s 23 from Noel, a 2012 graduate, that puts the dynamic forward just one goal shy heading into the team’s last game of the regular season, at 6 p.m. Thursday night at home against rival Battle Mountain.

Whether he’s challenging for the all-time school scoring record or not, Murphy Bohlmann’s season has been explosive in a way few have ever been for the Sailors.

His 22 goals has him tied for sixth in the state regardless of classification.

He’s scored in 11 of his team’s 14 games and has scored at least two goals in seven games. He has four hat tricks, three of which came in a consecutive streak early in the season that set the league and the state on notice that Bohlmann was someone to key on.

How’s he managed to keep scoring even after that attention has been turned his way? It’s taken a relentlessly aggressive approach combined with a sprinter’s speed, an artist’s touch and a coach’s son’s soccer IQ.

“Some of Murphy’s success has truly come from great individual effort and hunger,” Rob Bohlmann said. “He does have a hunger, and he has an understanding and he finds those opportunities to get behind a defense.”

Both father and son are quick to paint a larger picture, however, portraying Murphy as the pointy end of a powerful offensive weapon that encompasses the entire team.

There was no better, and certainly no more important, example than goal no. 22, which Murphy scored early in Tuesday night’s game at Summit.

Alejo Quezada, a junior, stole the ball from Summit in the midfield. He unloaded it to classmate Quinn Connell, who quickly found sophomore Kevin Kaster moving down the field.

Kaster reversed the field, a strategy the team had stressed pre-game, and fed the ball to senior Nick Kocik.

Kocik put together a run toward the end of the field then turned and launched a ball in toward the box, finding a hustling Murphy Bohlmann, who delicately took control and quickly put it away past the keeper’s left hand for a one goal lead.

It was the only goal of the game, helping deliver Steamboat a 1-0 victory that locked the squad up in second place in the Western Slope League, thus guaranteeing the team a spot in the Class 4A tournament.

“Really, first and foremost, it’s about the team and the personalities on the team,” Rob Bohlmann said. “A lot of his goals are the finishing end of a great series of teamwork.”

Plenty of it comes down to the characteristics of the various players on the team. Rob Bohlmann said sophomore Daniel Lopez has been an asset on the team but isn’t as comfortable leading the attack, even though his five goals are third on the team. Instead, he leads the team in assists.

“My team does a great job creating it,” Murphy said. “I’m just there to put the cherry on top.”

Murphy Bohlmann never pictured himself atop the stat sheet. He was usually the team’s goalie growing up, and it was in goal that he saw his first varsity action as a freshman. Still, he never took over that role at the high school level. He didn’t score his first varsity goal until he was several games into his sophomore season, and then, with a different mix of players and different responsibilities, he didn’t rack up the offensive stats the way he has this season.

He finished that season with seven goals, tied for third on the team.

A return to goalkeeper was possible this fall, but the team found more-than-capable answers for that in Cruz Erickson and Ian Dahlen. So, Murphy Bohlmann was selected to lead that attack, and he has.

It hasn’t been to the detriment of the team or its scoring. Despite Murphy soaking up so many of the goals, the team has a wider spread of players scoring than it’s had in recent seasons. It’s had 15 players score. Last year’s team had just 11.

Eclipsing those marks is something Murphy, who’s maybe or maybe not one goal shy of the school’s scoring record, is eager to tackle.

“Especially growing up as a kid with my dad as the coach, I went to almost every game,” he said. “I was very into it, and I couldn’t wait for my turn to step up and do my part, so setting the scoring record, it would definitely mean a lot.”