Steamboat tops Summit 2-0 in Spring Storm on the Road 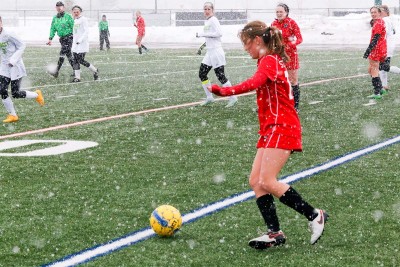 Spring weather was the star of the game on Tuesday night. While more than 6 inches of snow fell in Steamboat, the Sailors found themselves in a winter storm of their own at Summit High School. A flurry of shots in the midst of blowing snow allowed the Sailors to beat Summit, 2-0 on the road and remain undefeated on the season and notching their fourth shutout in their 6-0 record.

Steamboat came out strong, with a nifty 5 pass combination to put the Sailors up after just 38 seconds. The play ended with Senior Jordi Floyd connecting with Senior Natalie Bohlmann, who found Freshman Delaney Moon on a one-touch shot over Summit Tiger’s Goalkeeper. It was the fastest goal of the Sailors season and would be the only goal of the first half.

Not for lack of trying by the Sailors. After 16 shot with 10 on goal, Steamboat just could not find the back of the net. Dominating control of the ball in the midfield, in blowing bitter cold conditions, the Sailors were missing a bit of aggressiveness that has defined wins at Palisade and against Battle Mountain earlier in the season.

“We didn’t stop playing, but subconsciously, a goal in 38 seconds, it felt like, ‘Here we go,’” Bohlmann said. “ We lacked the urge you have to play within a game. The rest of the half, we were good, but we lacked that bit of hunger in attacking.” The weather surely had something to do with it.

In the second half, Natalie Bohlmann put away a corner kick off the foot of Junior Maggie Henry, scoring while working against falling snow blown by a stiff wind.

Steamboat, meanwhile, was stellar on defense, thanks, in part, to a strong game from Ellese Lupori at center back. Add in 7 saves from goalkeeper Ocoee Wilson, including a game-saving breakaway in the first half from 12 yards out and some heroics in the box during a flurry of shots off of a corner from the Tigers in the second half.

“We did better in the second half,” Bohlmann said. “The girls did a nice job, but we need to learn to adjust, how to respond when it’s not happening how we’d like it to.

“This was one of those games that is going to make us stronger.”

The Sailors hit the road again on Thursday to take on league opponent Eagle Valley before returning home on Saturday to take on Centaurus High School at 1pm.