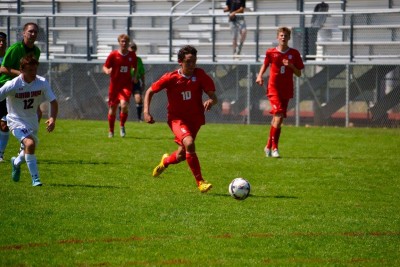 The first game of the season for Steamboat took place at Glenwood Springs High School and the Demons’s came to play. Glenwood was coming off an overtime win earlier in the week over Eagle Valley. Emotions were running high for everyone. The Sailors came into the game looking to find themselves.

One Minute later, Archuleta made it 2-0 after out running the Glenwood defense to find himself 1 on 1 with the Glenwood Keeper. With good composure, Steamboat’s #10 was able to find the back of the net.

Glenwood Springs was able to pull the game closer after a Penalty Kick was called on the Sailors to make it 2-1.

Not to be outdone, Archuleta was able to bury a floated ball from Charlie Beurskens’ head into the back of the Glenwood net. Glenwood would score one more goal before half to help the Demon’s pull in a bit closer at 3-2.

Jack Salyer would open up the Steamboat scoring in the second half. Salyer and Beurskens were able to catch the Demons napping on a free kick from the top of the box. With a short pass from Charlie, around the wall, that was set up at about 5 yards, Jack was able to collect the ball, turn and bury the ball in the Glenwood net to put the sailors up 4-2.

Late in the second half, Glenwood would come back to make the game 4-3. With time ticking down, the Demons would then earn their second PK of the game, after two players collided on the far edge of the box. They would capitalize on the call and even out the game at 4-4.

At the end of regulation the teams would be knotted up at 4-4. 2 minutes into overtime, Archuleta found himself in and behind the Glenwood defense. Streaking in towards goal, Archuleta we find the back of the net for his 4th goal of the game, and the Golden Goal of the match to give the Sailors their first win of the 2015 season.

The Sailors will be in action to take on the Moffat County Bulldogs on Thursday night at home at 6:30 pm.