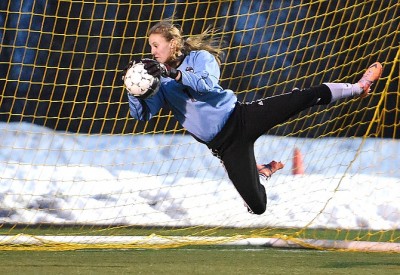 Photo by Joel Reichenberger
Steamboat junior Ocoee Wilson hauls in a shot with a diving save Thursday against Eagle Valley. The Sailors came away 2-1 winners, improving their record to 3-0.

Going in the Sailors knew Eagle Valley was ready, more than ready, to take on Steamboat. Eagle Valley was focused off the bus and ready to take down the Sailors at Gardner field. The Sailors were coming off an over time win on Tuesday and looking to extend their unbeaten streak in 2015 to three. It was Junior Carolyn Walters took on the toughest task of the night, keeping 2014 All State Eagle Valley player Mariel Gutierrez in check, a task she stepped up to in a big way.

“We know Mariel is good for at least one during the game, but we have to limit her opportunities,” said coach Rob Bohlmann before the game.

It was another Bohlmann who would make a big impact on the score board for the night. Junior Natalie Bohlmann was able to slotted a switch of the field to Mackenzie Gansmann in the 15th minute that was the assist that put Steamboat up 1-0 early in the first half, and it was her here own shot off the goalie and the post that put Steamboat up 2-0 in the 24th minute. Goalkeeper Ocoee Wilson proved she is still one of the best goalkeepers on the western slope with two huge saves off of deadball free kicks by Gutierrez, one to the keeper’s right and the other that Wilson was able to just hit over the cross bar.

Walters, with some help from Logan Sankey and Katie Brodie, were able to keep Gutierrez in check for the entire first half. In the second, true to Bohlmann’s prediction, Gutierrez was able to get free on a corner to strike a strong ball into the back of the net to make the score 2-1.

Steamboat had a few more opportunities at goal in the closing minutes but was unable to find the back of the net. The first meeting between the Sailors and the Devils ended with a Sailor win 2-1.

Steamboat will travel Tuesday for the second game of the series, which will prove to be a huge challenge for the both teams, now knowing exactly what they are facing.