Steamboat Springs girls soccer program ready to go, even if fields are not

Ready or not, the 2019 season will open Saturday as the Steamboat Springs High School girls soccer team travels to Denver to take on Colorado Academy in the team’s first game of the new season. 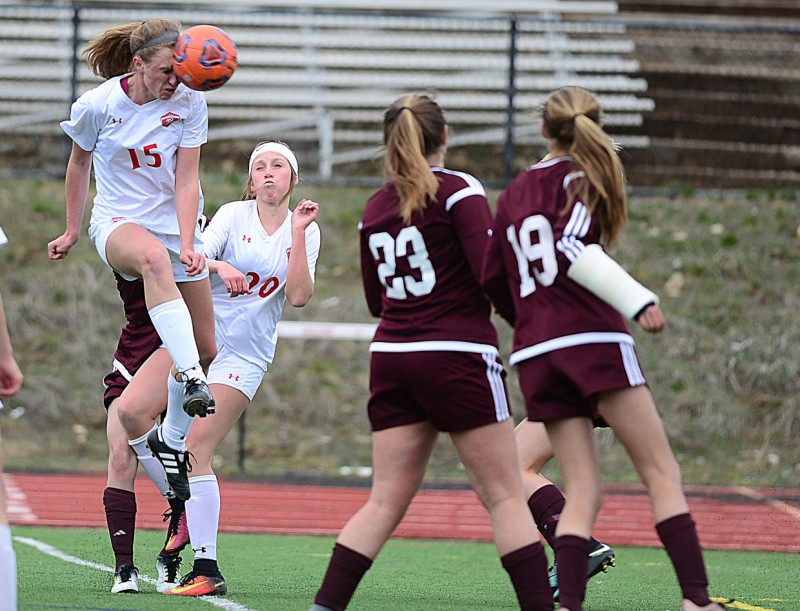 Steamboat’s Delaney Moon uses her head against Golden last season in a game at Gardner Field. Moon will be one of several seniors on this year’s roster looking to find success in the Western Slope League. (Photo by John F. Russell)

The season, so far, has been filled with plenty of time in the gym and tons of energy and excitement, according to head coach Rob Bohlmann. What it has not been filled with is time on the turf, and last weekend’s snow put a damper on a planned trip to Metropolitan State University in Denver, where the Sailors had hoped to ramp up their play to game speed.

“We have 52 players out for the team, and we are training in tight spaces right now,” Bohlmann said. “The vibe is really good. There is a tremendous amount of excitement. The work rate has been really high, and it’s the kind of environment that you want in preseason.”

The team will be looking to maintain that enthusiasm this week as the players prepare for the season opener against Colorado Academy. The game is scheduled to begin at 11 a.m. Saturday in Denver, weather permitting.

“We feel good about the opportunity to play them,” Bohlmann said about the team that won state titles in 1999, 2003, 2014 and 2015. “They have a very rich soccer tradition on the girls side. It’s a really, really competitive group, and so it’s going to be a good opening match.”

The Mustangs are scheduled to open their season against Valor Christian on Thursday and will come into the game with a few more minutes under their cleats than the Sailors.

On the other side of the ball, some of the Sailors were on turf during a voluntary Blues Break preseason training camp, but outside of that, Saturday is the team’s first chance to play on a field.

“I’m thankful that we didn’t schedule anything in Steamboat,” Bohlmann said of lining up games at Gardner Field early this season. “There is a slab of anywhere from 6 to 8 to 10 inches of frozen snow on the field. This (season) could be like the good ol’ days where we don’t get outdoors for a while.”

But, that doesn’t mean Bohlmann or his players are making any excuses. The coach said the Steamboat players’ focus has been on fitness and working on developing the team’s culture.

This year’s class of seniors will include Delaney Moon and Lucy Wilson, who both earned first team all-league honors last year. Other returning seniors include Rachelle Koly, Corey Petix and Megan Salyer, who missed the 2018 season with a knee injury. The team also picked up transfer Keigan Rand, who will graduate this year.

The Western Slope League is again expected to be competitive with perennial powerhouses like Battle Mountain, Glenwood Springs and Palisade leading the way. Last year, the Sailors finished fourth, just behind Palisade, and fell short in the rankings that are used to seed the state tournament.

Bohlmann expects the Sailors to be in the mix again this season, and he said focusing on one or two key games would be a mistake.

“You have to look at every game, because, if you start focusing on the games you think are big games, then, subconsciously, you can start to slip in consistency and approach,” Bohlmann said. “The team could end up dropping a game that you didn’t think was big, but then it turns out to be just as big.”