SteamboatToday.com — The score was the same Tuesday night, 3-1, as the Steamboat Springs High School girls soccer team beat Glenwood Springs by that same tally for the second consecutive game. 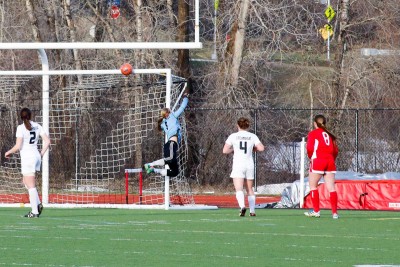 The Sailors pulled off an identical feat last week in Glenwood.

The win puts the team, 9-1 and 8-0 in the league, on a collision course for a huge Friday matchup on the road against Battle Mountain.

The outcome of that game could decide the league title.

The Huskies haven’t lost in the league since that game, however, and will enter with a chance to force a tie for the league lead with, for Steamboat, three games remaining.

One key to Friday could be the Sailors’ health, which was an issue against Glenwood. The team was without two of its top goal scorers in senior Natalie Bohlmann and freshman Delaney Moon. Both were absent with illness, and coaches were unsure of their statuses for Friday.

Tuesday, Steamboat made it work without the pair, most effectively in the first half. Junior Brooke Buchanan, another of those top goal scorers, put the team up early, just 7 minutes in, with a strike. Jordi Floyd then made it 2-0 in the 24th minute when her shot ricocheted off one post, past the Glenwood keeper, then off the other post and, finally, in.

The Demons trailed 2-0 into the second and didn’t often challenge the Sailors’ defense. They didn’t quit either, however, and got on the board midway through the second half. Steamboat goalie Ocoee Wilson had to be pulled from the game after drawing a yellow card when she collided with Glenwood’s Ashley Weir. Her teammate, Nina Scruton, then took a direct kick from 25 yards out and buried it in the far upper corner of the goal, putting some urgency back in the Sailors

“When the momentum shifts, or the other team is bringing it to you, you have to regroup and reorganize,” Bohlmann said. “There wasn’t that communication or effort internally to reorganize. It’s got to come internally.”

It did come internally as the team controlled the final segment of the game to close out the win. The final goal came from sophomore Keelan Vargas, who capped a strong team push with a shot past the keeper.

Now, for the Sailors, it’s on to Battle Mountain.

“They’re definitely going to want this win, but we want it more,” Buchanan said. “We’ve been wanting it for a long time, and we’re not going to let that go.”