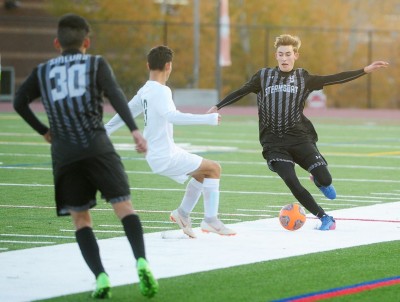 Since then, it has remained the only tie for both teams, and tonight, they’d add another, tying 3-3 after a double overtime with countless possible endings.

Multiple shots on goal were taken in the first half, but neither team lit the scoreboard by halftime.

The Tigers changed the narrative in the second half, senior Farid Infante scored the first goal within the first nine minutes. It didn’t take long for the Sailors to respond with a shot by senior Quinn Connell up the middle to tie it up 1-1.

The next two goals by the Tigers came within a span of two minutes, including another by Infante, taking a 3-1 lead. Senior Riley Moore would finally get the perfect shot at 16:18 left in the half to make it 3-2. Senior Murphy Bohlmann then tied it up with a header off a free kick by Moore with 9:14 left.

It’s worth noting that, before going into overtime, junior Daniel Lopez nailed a breakaway shot to the corner with 56 seconds left, but he was called offsides and the clock ran out.

“We always measure with effort and the leadership and there’s a lot of stuff that these guys struggled with each other coming back from being down,” Sailors head coach Rob Bohlmann said. “The effort got better and better as the game went along.”

Overtime looked like the first half, except, more intense.

The Tigers’ goalie, senior Chris Lopez, was putting on an impressive display in goal. At one point, three Sailors surrounded him at the end of the first overtime, taking shots on goal, but he deflected every one.

The Sailors took 36 shots in the game, 13 were considered on goal.

“Goalie came back from an injury, this was his first game back,” Summit head coach Tommy Gogolen said. “He played phenomenal, good to have him back there. It proved how good and how athletic he is.”

Little did they know that Steamboat junior Juan Campoverde was also playing in his first game back from a broken hand injury.

“We are so proud of Juan, first game after being out for over a month,” Rob Bohlmann said. “It’s his first game back and huge presence, lifted the team.”

The two felt like they had a lot to prove and were hungry for competition. After the game, Campoverde hung his head as he walked away with his teammates consoling him. Bohlmann comforted him, as he did with the rest, hugging every single member of his team and telling them how proud he was.

“We walk away from this like, ‘Ugh,’ you know? But sometimes that’s the game.” Bohlmann said.

Bohlmann doesn’t quite know why Summit is always a close game. Last Thursday, the Tigers defeated Eagle Valley by a mere 2-1 score. The Sailors had defeated the Devils two days earlier, 10-1.

But when you’re a consistent playoff-bound team, others tend to bring their best to try to measure up.

“That’s a good question,” Gogolen said when asked why this matchup tends to be so competitive.

“We always get hyped up to play Steamboat. Rob is a great coach, we’ve been battling for years. Something about Steamboat and Summit, it’s always a high-quality game.”

Steamboat next travels to Battle Mountain at 6 p.m. Oct. 18.