Steamboat soccer swept out in state’s second round 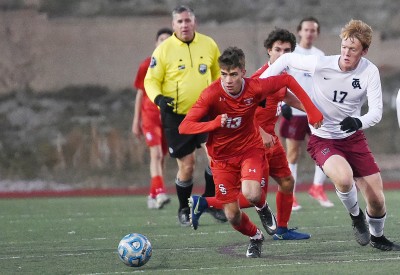 Stemaboat’s Muprhy Bohlmann looks to push the ball up the field on Tuesday playing against The Classical Academy in the second round of the Class 4A state soccer tournament.

Tuesday’s game won’t make that highlight reel but after a 4-0 season-ending loss in Colorado Springs to The Classical Academy in the second round of the Class 4A state playoffs, the Sailors had no trouble dwelling on those happier times.

“It’s tough to end like this,” Steamboat senior Nick Kocik said, “but I love this team. I wouldn’t want to finish the season with anyone else.”

Tuesday wasn’t a night of horrors for the squad, but up against one of the state’s most prolific offenses, it needed a nearly perfect performance.

Steamboat, the 21st seed in the 32-team field and the highest seed to advance to the second round, got plenty of solid play, but not enough to pull off a second upset in this year’s tournament.

The Titans, the No. 5 seed in the tournament, got on the board in the 16th minute when Aaron Peck launched a shot from 20 yards out. It deflected off another player and angled into the goal.

TCA’s Jake Slater scored to make it 2-0 less than 90 seconds later, deliberately working the ball toward the middle of the field before putting it away in the far corner of the goal.

The score climbed to 3-0 in the waning seconds of the first half. TCA drew a foul near midfield. It didn’t score on the ensuing kick, but did draw another foul in front of the goal, setting up a penalty kick from Jonny Stephens with 5.1 seconds remaining in the first half.

TCA got one final goal early in the second, another from Slater.

“They just work,” Kocik said. “Their chemistry is spot on.”

The Sailors were a pass away from really threatening several times in the first half, then had several big opportunities in the second that slipped just away from them.

The best came after a major mistake from Titans’ keeper Jack Carpenter, one he quickly redeemed in jaw-dropping fashion. He fielded the ball with his hands, but let his momentum carry him outside the box. That set up Steamboat with a free kick just about 20 yards from the net. The Sailors got exactly the look they wanted to, as well, lobbing the ball in, right in front of the net. Kocik caught it with his head and sent it flying toward the goal.

Carpenter dove and just caught the ball with the end of his fingertips. The ball didn’t stop and still flew toward the net, but Carpenter’s touch it did slow it, allowing him to reach out an arm and scoop the ball away just before it crossed the line.

The Sailors were shut out for just the third time this season.

“By no means did we run the show, but we felt really good about the start and you come away feeling almost better than we did in that game last week,” Bohlmann said, referring to the team’s 1-0 first-round win against Golden, a glorious result for the Sailors, but a rather sloppy game.

“In the end, you’d like to keep it a little closer, but we kept playing,” Bohlmann said. “We had great leadership out there and we were challenged in a lot of different ways and kept playing.”

The Classical Academy, the defending state champs and participants in the 4A state championship game in each of the last four seasons, rolls on to the playoff quarterfinals in search of back-to-back titles. It will face No. 4 Montrose thereafter the Indians beat Standley Lake, 2-0.

The only other Western Slope League team to make this year’s 4A tournament, Battle Mountain, also lost Tuesday in the second round, falling 3-2 to Niwot.

Steamboat finished its season 12-5-1, its best result since 2011, the last time the team made the second round of the state tournament.

There were highlights along the way. Bohlmann pointed to the team’s recovery after a potentially devastating 4-3 overtime loss to Glenwood Springs. There was the first-round playoff win against Golden, 1-0 in a wicked windstorm, and, likely at the top of any Sailors list, there was a 4-1 victory at home against Battle Mountain.

Along the way, Steamboat junior Murphy Bohlmann racked up a new school record in goals scored in a season. Held scoreless in the two playoffs games, his mark stands at 24.

It all amounted to plenty to smile about, even on a night the season ended.

“That Glenwood game, that really hurt, and the boys were really able to reel it back in and play good soccer,” Rob Bohlmann said. “From that time forward, we continued to get better as a team culminating in that special night against Battle Mountain.

“When the season was really on the line, in the last week of the season, that was pretty special.”