EDWARDS — Slow start for league-leading Battle Mountain or a patient one? How about languid? 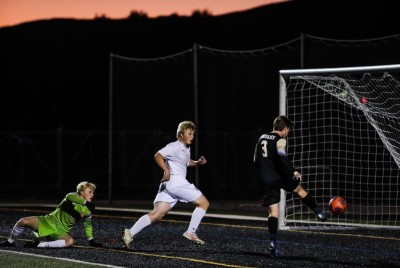 Battle Mountain’s Trevino Twiss scores a goal against Steamboat Tuesday in Edwards. The Huskies moved to 8-0 on the season.
Chris Dillmann/Vail Daily

Battle Mountain soccer overcame either a slow first half or patient one, leading Steamboat Springs just 1-0 at the half on Tuesday before a second-half barrage led the Huskies to a 5-0 rout of the Sailors.

Classifying the type of start an 8-0 team has is one of those privileges an 8-0 team may have, but the Huskies are getting into heady territory.

“I think it was patience,” Huskies coach David Cope said. “The boys showed patience and Steamboat had a game plan to keep spaces crowded, to sit back. We had so much of the ball. There wasn’t any worry. There were times I thought we could have played faster. We were languid, ohh, good word. In the second half, we accelerated the play.”

As Cope rightly noted, the visiting Sailors packed it in defensively to clog passing lanes. As the season progresses, teams will probably show different defensive looks to try to slow down the Huskies offensively. Goals will be harder to earn.

After the Tuesday’s game, Steamboat is 1-4.

Expectations
Cope believed the Huskies will drop out of the No. 1 spot after Tuesday’s game because everything is in motion throughout the state. That said, he’s OK with his team doing a little RPI watching.

Battle Mountain had the ball for most of the first half. The Huskies, with the exception of Castillo, just couldn’t pot more than one.

That Steamboat stymied the Huskies as long as it did was something that made Sailors coach Rob Bohlmann happy.

“Most important for our group, we wanted to come in organized and with a plan to where win, lose or draw, we walked away feeling success, and that’s how our group feels,” said Bohlmann whose team hosts Summit County on Thursday.

Kevin Chavez, who assisted on Castillo’s goal in the first half, got the Huskies going in the second half. Chavez’s shot caromed off the crossbar and Trevino Twiss hopped on the rebound for a 2-0 lead.

Dani Barajas and Wyatt Hall then struck on laser finishes. Seeing Barajas out and about gladdened Huskies fans. The senior has been dealing with a left-ankle injury of late.

Article by Chris Freud of the Vail Daily appeared on SteamboatPilot.com.