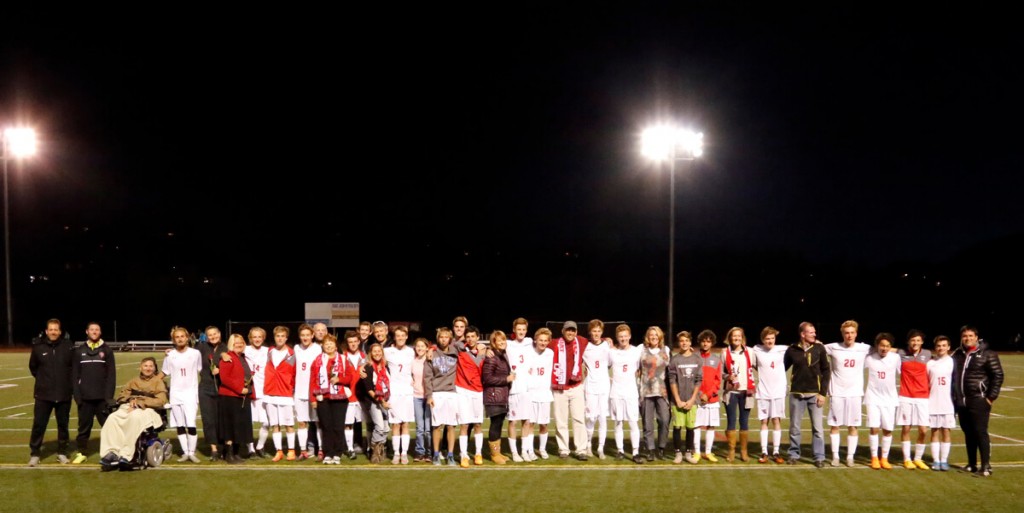 Immediately following Tuesday’s 4-2 loss at Eagle Valley, which snapped an eight-game win streak for the Sailors, Steamboat Springs High School boys’ soccer coach Rob Bohlmann went to work to make sure there was no long-term fallout.

“You are always a little worried. Are you going to come off flat after a big game like that?” Bohlmann said. “But we addressed it right after the game. I was proud of their efforts on Tuesday night, and we weren’t going to miss a beat.”

Sharp, neat and tidy was how Bohlmann described Thursday’s 6-0 senior day win over Delta at Gardner Field, the exact sort of performance SSHS wanted after its emotional defeat two days prior.

“It’s a really good thing for us to get us back on our feet a little bit,” Sailor senior Charlie Beurskens said. “That loss was unlucky. They put in a few goals, and we just couldn’t come back from them.”

Delta (3-10) fared better against Steamboat in their first matchup Sept. 12, a 1-0 Sailor victory. But that game was the second of two in two days for SSHS, the first a 6-1 win at Palisade, and the game was played on Delta’s thicker, slower field when the Panthers were still “hungry,” as Bohlmann put it.

It took 20 minutes for the Sailors to get going Thursday — even after the game ball was dropped via helicopter prior to the start — but once they started rolling, Delta couldn’t keep up.

The first three goals came with spectacular efforts. Junior Ross VanHara scored in the 21st minute on his own deflection, Delta goalie Joseph Holiman left out of position on the rebound. About five minutes later, senior Jack Salyer’s shot was deflected into the net off a Delta defender moments after Holiman had stopped the original strike. Then, with 13 minutes to play in the half, junior Cruz Archuleta made a circus shot over Holiman’s head, the two nearly colliding at one point, to make it 3-0.

“That’s the bounce we are trying to find,” Bohlmann said. “It’s can you be creative and crafty in the right places? But it’s also just about doing the really simple things well.”

Steamboat led 4-0 at halftime after Archuleta scored his second goal on a nice assist from Beurskens in the 35th minute. Beurskens scored his own goal midway through the second half, with Archuleta getting the hat trick with a third goal with 12 minutes to play.

The win puts an end to Steamboat’s regular-season home slate. SSHS, 11-2, will play Centaurus on Saturday at Dick’s Sporting Goods Park in Denver, home of the MLS’s Colorado Rapids. Then, next Thursday, it’s the season finale at Battle Mountain, with the winner earning the Western Slope league title.

“I’m not super nostalgic, because it hasn’t really sunk in yet,” Beurskens said of having possibly played his final home game as a Sailor. “But we are going to be playing for a league title on Thursday, so we are going to be really excited for that. Hopefully, this wasn’t our last home game. Hopefully, we get a home playoff game.”

The Sailors are still looking for donations to help pay for their game Saturday at Dick’s Sporting Goods Park. To make a contribution, visit sailorsoccer.com and click on the “Rapids Fundraiser” tab at the top of the page.

“What a great opportunity, to be a high school kid and a high school player and go in and play in a world-class venue like that in a professional environment,” Bohlmann said. “It’s going to be a great experience. Obviously, we’ve had this circled on our calendar for a long time.”

Original Article can be found at SteamboatToday.com