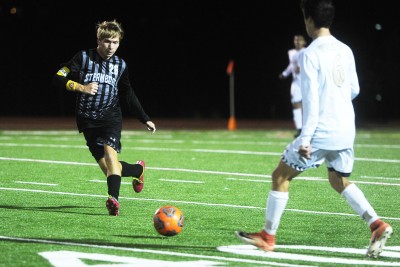 For the Sailors, it was a chance at redeeming a 7-2 loss to the Huskies on Sept. 18, but the Huskies were looking to complete a Western Slope sweep.

The Sailors may have had more to play for — a better playoff seed, an upset win over the No. 6 team in Class 4A and senior night — but it was the Huskies who, once again, emerged victorious 3-1.

Head coach David Cope said that although the Huskies came into the game with a perfect record, the same had happened last year when they came to Steamboat and lost.

Despite the loss, it was a different game than last time.

“It’s not necessarily about the goal differential, but it’s also our approach and how we played,” Steamboat Springs head coach Rob Bohlmann said. “We played a fantastic first 40. Battle Mountain played a fantastic second 40. Tactically, we were brilliant in the first half, and then they really stretched us out in the second.”

“We feel really good about the progression from game one to game two.”

The Sailors had a stronger defensive presence returning their starting goalie, junior Juan Campoverde. Campoverde had been out for four weeks from a broken left pinky, an injury that happened during a practice after the Palisade game Sept. 29.

He returned in the Tuesday game against Summit, but his confidence was heightened going into the matchup against Battle Mountain.

It took a few minutes of playing for him to gain confidence back in the previous game against Summit. Although a pinky injury might seem minute, it was a big setback for the goalie.

“I was debating whether I was going to go for a 50/50,” Campoverde said. “But, there was a free kick rewarded to them, and they put in the box, and I came out and punched the ball, so that was me getting over that.”

Against Battle Mountain, Campoverde stayed on his toes in goal. He hyped the crowd with impressive saves. One was at 29 minutes, 34 seconds left in the first when he deflected a shot before the Huskies shot another over the goal posts.

Another came in the second half with 19:05 left, where Campoverde dove for a corner shot and deflected it. After he returned the ball to his team, he’d briefly celebrate lifting his arms to the crowd, signaling for them to get loud.

Steamboat Springs knocked its first goal at 21:15 left in the first half. Senior Riley Moore shot a goal kick up in the air. Senior Kevin Kaster knocked it with his foot for a line drive up the middle to put the Sailors up 1-0.

Four minutes later, Battle Mountain junior Trevino Twiss knocked a goal into the top of the net from near midfield to tie it up 1-1.

The Huskies took the lead in the second half behind a shot by senior Jered Vargas, then Dani Barajas broke Battle Mountain’s school scoring record, knocking in his 24th goal to make the final score 3-1.

In the post-game huddle, Cope told his players he was prouder of the men they had become than the win tonight. Tomorrow, the team takes a much-earned break from practice, but on Saturday, they’ll play a fun round-robin tournament by class: freshman, sophomore, junior and seniors.

That’ll help relieve the stress of the playoff seeding, which releases Sunday.

On the other side of the field, the senior Sailors waved to the crowd as a thank you, and gathered to shake Bohlmann’s hand for a good season. They also await their playoff fate on Sunday.

“We’ve become complete again,” Bohlmann said. “Now it’s: Can we go out and get a full 80 minutes in?”