STEAMBOAT SPRINGS — The Steamboat Springs High School boys soccer team was back at work Monday afternoon preparing for a historic meeting in the opening round of the 4A Colorado State High School soccer playoffs Wednesday in Durango against the Demons. 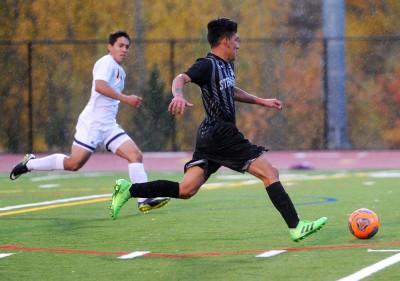 Steamboat Springs High School junior Daniel Lopez dribbles down the field during the game against Rifle on Tuesday, Oct. 2 at Gardner Field. (Photograph by Leah Vann)

“In our history, Steamboat has not played Durango, so this will be a first meeting,” said Rob Bohlmann, the Sailors head coach. “It’s a good opponent, and we will go in with a lot of respect for them — two Western Slope teams, one is from the north and one is from the south — and they have been very solid the past three or four years … they had a deep run (in the playoffs) last year.”

Durango, 13-1-1 overall this season and 7-0-1 in the Southwestern Soccer League, is currently ranked No. 4 in state playoff brackets.

Steamboat, ranked No. 28, has been strong this season in the competitive Western Slope League that will also send No. 5 Battle Mountain and No. 20 Glenwood Springs to the opening round of the state playoffs.

The Sailors were set to play Battle Mountain in the first round of playoffs based on the rating percentage index rankings, which are used by the Colorado High School Activities Association to seed the playoffs. Bohlmann said tournament officials did not want two league opponents meeting in the first round and swapped No. 29 Kennedy, 8-6-1, and No. 28 Steamboat, 9-4-2, in the brackets.

The move means Steamboat will not face Battle Mountain for a third time this season, at least in the opening round. But it also means the Sailors face a more than six-hour bus ride to Durango for the game.

Bohlmann said the Sailors plan to leave Tuesday afternoon and head to Montrose where they will have a light work out. The following day, the team will get back on the bus for the final leg of the journey to Durango where the players will tour Fort Lewis College prior to the game, which is scheduled to start at 6 p.m. Wednesday at Durango High School.

Steamboat Radio is planning on live-streaming the game on its website.

“There has only been one game, the first one against Battle Mountain, to where it was really a non-contest,” Bohlmann said of the Sailors’ efforts this season. “In the tight competitive games, we have been in there.”

Even though this is the first time the two soccer programs have taken the field against one another, the teams have faced several common opponents this season.

Durango’s only loss of the season came against Evergreen in September when they lost 4-2. Steamboat also played Evergreen, losing a hard-fought 4-3 match a little more than a week ago. Durango also faced Glenwood Springs, winning 3-1 in the season opener, and Battle Mountain, claiming a 3-2 victory in overtime. Steamboat lost twice to Battle Mountain and split the season series with Glenwood.

“Going into playoffs is kind of like being in halftime of any game,” Bohlmann said. “It’s an opportunity to reset, to reflect and that’s where we are right now. We feel really good about things, but now it’s more of the consistency. ”

The coach understands the Sailors will be underdogs in the contest, but he also knows the teams that make it to the playoffs are all good.

“We have earned the opportunity,” Bohlmann said. “It’s not like we just got in on a little detail. It’s about addressing how we can be better and the number one thing we go to is our consistency and being able to play the full 80 minutes.”