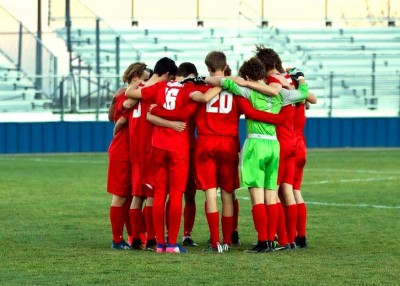 They had only barely finished celebrating their own 1-0 upset of No. 12 Golden in the Class 4A state soccer tournament and had yet to even start loading the bus last Thursday night when the attention of the boys on the Steamboat Springs High School soccer team drifted ahead nearly a week.

Steamboat pulled off one big upset in the tournament. Was another too much to ask for — one to establish a more favorable matchup for Steamboat in the second round?

It was too much to ask for, apparently.

The Classical Academy, the No. 5 seed in the 32-team tournament crushed Longmont, 7-0, setting up a game Tuesday against the Sailors in the second-round of the tournament.

The winner of that game, set for 4:30 p.m. at The Classical Academy in Colorado Springs, will advance to the state quarterfinals.

The Sailors had good reason to be wary of playing the Titans, 15-1 this season. Classical Academy’s No. 5 seed and their No. 6 ranking in the latest CHSAANow.com poll don’t exactly indicate how much of a force they’ve been in 4A soccer for the last five seasons.

The Titans are the defending state champs. They blew out Battle Mountain last fall in the 4A title game, 7-1. They made the title game in 2015, 2014 and 2013 as well, losing in the championships in each of those seasons.

No team has ended Classical Academy’s season short of the championship game since 2012, when the Titans still made the quarterfinals.

They’ve lost just once this year, in the first game of the season in overtime, 3-2, against Air Academy, the top-ranked team in the state and the top-seeded team in the tournament.

It would be enough to leave even top-ranked teams quaking a bit, but Steamboat Springs coach Rob Bohlmann said he’s not looking at it as an intimidating moment but a promising one.

“It’s a good opportunity for our group,” he said.

Steamboat may have picked up its most dramatic and important win of the season against Golden, but the Sailors didn’t play their best soccer. That came the week before in a 4-1 win at home against league champion Battle Mountain.

“The biggest challenge will be, can we find the flow we saw numerous times in big occasions over the course of the season?” Bohlmann said. “Battle Mountain, that was the epitome of the flow and type of game we want, so our training since the last game has been recovery and on finding that flow.”

The Titans are led by senior Jake Slater, who’s one of the state’s leading scorers. He has 25 goals this year, plus 11 assists. He’s at the top of a senior-laden lineup. The team’s top four scorers are all seniors, though both goalkeepers — the team has split time in goal almost evenly between two — are sophomores.

That’s been enough for another stellar season for TCA, and that plus the program’s history is certainly enough to earn the Sailors’ respect. They said it doesn’t have them intimidated, however.

“The most important thing is we have to be cohesive,” Bohlmann said. “We have to be organized, and we have to battle. We aren’t looking to do anything different or change our gameplan. … We have to focus on what’s gotten us here.”