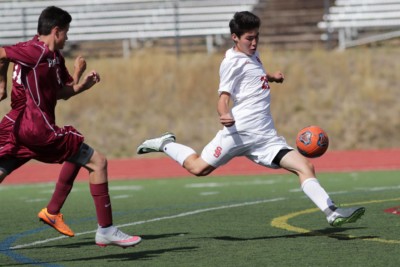 For the second time this week, the Steamboat Springs High School boys soccer team took care of business at home.

“We are treating every game like a playoff game,” Steamboat Springs senior Ross Van Hara said after Saturday’s 8-0 win against Palisade. “It doesn’t matter who we are playing — Battle Mountain, Eagle Valley, Summit, Rifle, Glenwood Springs or Palisade — we are playing like this is our last game. For the seniors, it might just be our last game. ”

On Saturday, the Sailors’ determination was balanced by a patient attack and well-timed runs.

Cruz Archuleta sparked the Sailors’ offensive attack with three goals in the first 15 minutes of play. He got assists on a nice through ball from Will McConnell to make the score 1-0 in the sixth minute. He scored his second goal on a diving header and drove the ball into the back of the net. The play was set up by a nice cross from Van Hara. Lane Salyer set up the senior’s final goal with another nice through pass.

But similar to Tuesday’s game against Glenwood, the Sailors once again got contributions from a number of players. Van Hara scored his first goal after being taken down in the penalty box going to goal in the 33rd minute. He put the penalty kick into the back of the net to give the Sailors a 4-0 lead. He added his second goal just as the first half was ending to give the home team a 5-0 lead at the half.

In the second, the Sailors settled into a more ball-control style of play, keeping the ball away from Palisade and limiting the Bulldogs’ chances to get back into the game. All the while, the Steamboat goals kept coming.

Will Beurskens was fouled going to goal, resulting in the Sailors’ second penalty kick of the game. He buried it in the back of the net to extend Steamboat’s lead to 6-0 in the 64th minute.

For the second time in as many games, Steamboat’s center back, Alex Coffey, was given the chance to move up, and for the second time, he managed to score. His second goal of the season came on a corner kick when his foot found a bouncing ball in front of the net, and he managed to beat the keeper. The goal came in the 67th minute to give Steamboat a 7-0 lead.

Van Hara capped things off in the 68th minute after he controlled a bouncing ball on the far left flank and lifted a high, hard shot goal with his left foot. The shot went over the outstretched hands of Palisade goalkeeper Shevah Flukey for Steamboat’s eighth goal of the game.

Steamboat outshot the Bulldogs 14-3 and dominated possession for most of the game. In their past two outings, the Sailors have not given up a goal and have outscored their opponents 15-0. The victory was Steamboat’s second consecutive and improves the team’s record to 8-3 overall and 6-2 in league play.

After the game, Steamboat coach Rob Bohlmann said he was happy with his players’ performance, adding the team plans to remain focused on the game at hand. He said it’s difficult to avoid looking forward to upcoming home games against Eagle Valley and Summit, but results in the league this week prove that can be dangerous.

This week, the team will have to keep that in mind as it prepares to host last-place Rifle on Tuesday.

Thursday, the Bears (0-7 in league play) took Eagle Valley (5-2 in league play) to overtime before falling 2-1. Summit — a team that defeated Steamboat earlier this season and was in front of the Sailors in the standings at the start of the week — was beaten by Glenwood Springs on Thursday 5-4.

Steamboat is currently in second place, one game behind Battle Mountain.