Steamboat soccer boxed out by Palisade

STEAMBOAT SPRINGS — Nothing demonstrated it better than a sterling save midway through the second half, though, really, the storm had already come and somewhat gone for Palisade High School goalie Sarah Cordova. 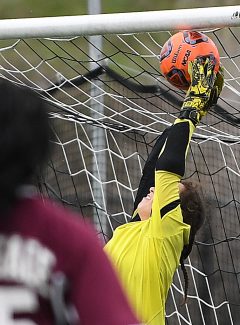 The Steamboat soccer team had an opportunity, a ball in front of the net, and Sailors sophomore Sophie Leeson connected, sending it in, or almost in. Cordova leaped straight up and caught the ball with her fingertips briefly pinning it against the crossbar. If the ball goes another inch, it’s a goal. Heck, if Cordova’s another inch shorter, it’s a goal.

As it was, it was another near miss on a day filled with them for Steamboat.

Palisade capitalized on its opportunities and did what it needed to do to keep the Sailors from answering, defeating Steamboat, 2-0.

“All game long our effort was right, and in the attacking third, there was just a little difference, creating a little more opportunity,” Steamboat coach Rob Bohlmann said. “It was so close, and it’s just connecting just right. When it comes down to it, we couldn’t just find that opportunity to crack it.”

The loss drops Steamboat to 8-4 overall on the season and 6-4 in the Western Slope Conference with just two games to go.

It makes it impossible for the Sailors to climb back into any kind of tie to win the conference. Battle Mountain, Palisade and Glenwood Springs will tangle over the next two weeks for that honor. Best case at this point is a third-place finish for the Sailors, but fourth may be more likely.

Nevertheless, Steamboat sits in a strong position in the state’s RPI ratings, which will decide the 32-team field for the state tournament. The Sailors are No. 23 entering the week.

Heading into its spring break, the team has more than a week off before its next game, a ‪May 1‬ showdown against Eagle Valley, 3-7 in the league. A weighty road game against Glenwood, 6-2, then awaits ‪May 3‬ to close out the league schedule.

“We still have a lot to play for, maybe not the top spot in the league, but a top spot and a playoff spot,” Bohlmann said.

Bohlmann said Steamboat played like it needed to Friday, but it couldn’t ever quite make the connections on offense it needed to. A dramatic Palisade save may have been one of the most notable near misses, but it was a day full of them.

The Sailors had opportunities early in the game, then more midway through the first half.
Palisade got on the board early with a goal from Sami Feller, then scored again in the second half on a hard shot from Lexi Newton that smashed into the far post and fell just over the line.

Steamboat had one point-blank opportunity go wide in the first half, then throughout the game made many of the moves and passes it needed to create opportunities, but the Sailors were always a step short on the final pass or a step away from winning the ball in a key moment.

“We needed to be a little more aggressive and come to the ball more. If we had come to the ball more and had better first touches, we could have put it in the back of the net,” junior Delaney Moon said. “We know what we need to do, but we’re not executing as well as we could be. There are moments where we do execute well, and those are our best parts of the game. If we can get that consistently, we’ll be able to do really well.”