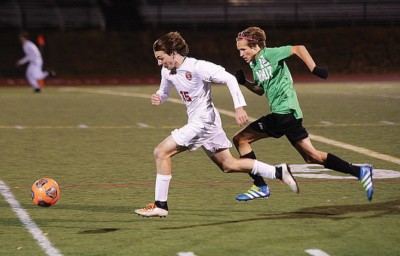 Steamboat Springs Ross VanHara makes a run toward goal in the first half of Tuesday’s Western Slope League game against Summit.

There will be a showdown in Edwards this week after the Steamboat Springs boys soccer team held on to beat the Summit Tigers in a rain-soaked contest Tuesday at Gardner Field 2-0.

“I’ve been thinking about it all season,” Steamboat’s Quinn Connell said about playing Battle Mountain for the title. “It’s for the league and I just hope we can get it done.”

To set up the showdown, the Sailors had to knock off the Summit Tigers on Tuesday at Gardner Field. The Sailors lost 4-2 to the Tigers earlier this season, and on Tuesday Summit brought its A-game hoping to keep the team’s own post-season dreams alive.

“We had to win this game,” Tiger’s goalkeeper Kyle Wertz said after the game. “If I don’t show up its all over. I think winning is the goal every time we step on the field, and that was my goal tonight.”

Wertz did his best to shut down the Sailors aggressive offensive attack most of the night, and finished the game with 17 saves on 19 shots. However, Steamboat was able to find the back of the net when it needed, including an early goal that put the pressure on the Summit players.

“Our boys left it on the field tonight,” Summit coach Tommy Gogolen said. “Steamboat played a great game and they deserved the win.”

The Sailors netted what turned out to be the game-winning goal only nine minutes into the game, when Connell was able to get a pass to teammate Will McConnell, who was able to beat Wertz for the goal.

Steamboat outshot Summit in the half 14-7, and the Sailors had several great opportunities turned away by the Tiger’s keeper.

At the half Steamboat honored the senior class, which includes Ben Anderson, Cruz Archuleta, Alex Coffey, Andrew McCawley, Mac Dumke, McConnell, Lane Salyer and Ross VanHara. At the same time Gogolen laid it on the line, telling his players they needed 40 minutes of the team’s best soccer if they wanted to keep their playoff dreams alive. The players responded in the second half with an aggressive push that threatened to break Steamboat’s defense at several points.

“I thought we had our chances, unfortunately the ball just didn’t go into the back of the net tonight,” Gogolen said. “We have to give credit to Steamboat their defense was really solid tonight.”

In fact the team got some great stops in its defense half, including a couple of stops from Coffey, and a few saves from McCawley in the goal. But the Sailors big break came from the offense in the 67th minute. Steamboat’s Archuleta was able to make a run up the middle of the field before making a nice pass to Anderson on the outside. Anderson took the ball to the right side of the penalty box, before sending the perfect crossing pass in front of the Summit net. Connell, who was standing near the 6-yard line, headed the ball into the back of the net to give the Sailors the cushion they so desperately needed in the final stretch of the game.

“There was lot of pressure for them, and they had most of the possession,” Connell said. “I think that goal really put it away. … I think that killed their spirit at a pretty critical point of the game.”

The Tigers will wrap up the regular season Thursday against the last-place Rifle Bears at home. However, Gogolen said the loss to Steamboat would make a berth to the playoffs difficult to get.

The Sailors will head to Edwards to take on the Battle Mountain Huskies, who are currently sitting atop the Western Slope standings. If the Sailors can win that game they will end up in a tie, but coach Rob Bohlmann said Steamboat has the upper hand in the tie-breaker and would win the league.

“It’s going to be a straight-up showdown,” Bohlmann said. “The team that wins the game, wins the league.”

Battle Mountain defeated the Sailors in Steamboat earlier this season 3-0. So, if the game were to end in a tie, the Huskies would hold onto the Western Slope title.