Steamboat players say they’ll forget the final score, but not the game

The Steamboat Springs Sailors fell to Eagle Valley 3-0 in the final home game of the season Tuesday at Gardner field, but the score isn’t what senior Ellie Kavanaugh will remember years from now. 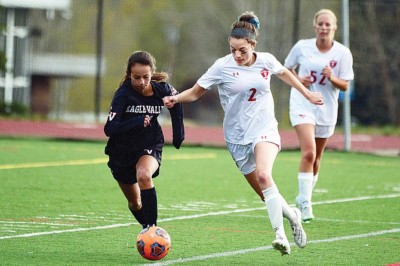 “I think it was probably one of the most meaningful games throughout my whole high school career,” Kavanaugh said following the loss. “Every year, you watched everyone have their senior night, and you think, ‘One day, that is going to be me.’ But you don’t realize how fast it comes, and I think just playing on your home turf is one of the best things, and playing with this amazing team has brought out a lot of emotion and nostalgia, and this is something that I’m going to remember the rest of my life.”

Truth is, the game, itself, took a back seat, as most of the Sailors’ 10 seniors stepped onto Gardner Field to compete one last time. Steamboat came out with an aggressive attack, moving sophomore Lucy Wilson into the attack. The move almost paid off early, but the Sailors could never seem to find that final push to the back of the net.

On the other side of the field, Eagle Valley earned a free kick on the right side, outside the penalty box. Eagle Valley junior Ginny Osteen was able to place the shot just over the outstretched fingertips of Steamboat senior Leah Rowse for the game’s first goal.

“We wanted to take advantage of those, because you never know when you are going to get them, and they might not come all that often. We were really happy to cash in on those,” Eagle Valley coach Maggie Sherman said after the game.

In fact, the Devils made the most of all of the team’s opportunities. Zoe Booth made the score 2-0 at the 32 minute mark on a shot from outside the 18, and Osteen cashed in on another free kick in the second half, this time, on a rainbow shot that fell over Rowse’s fingertips and just under the crossbar in the 50th minute.

“She can strike it well, and they were great goals,” Sailors coach Rob Bohlmann said. “You defend it as best as you can, but she connected really well. We felt good about the way we defended, especially in the second half.”

And while the coach would have loved to have left the field with a win, he said he was happy with the progress the Sailors have made in the latter part of the season. The last time Steamboat played the Devils in Gypsum, Eagle Valley topped the Steamboat 6-0.

“We come away feeling really good about this game, when you compare it to the first time we played them. There was a lot of improvement in a lot of areas, and it’s a sign of the hard work and resiliency and commitment that we have. To see the progression that we have had from the first half and the second half of the season is a sign that we have a bunch of great players.”

There were no tears following the loss, only hugs.

“I think with the improvement that we have seen all season, we are onward and upward, and we have a lot of young girls,” Bohlmann said. “Hopefully, next year, we will come out, and we will be the team that is up 6-0. We had to roll with the punches this season, but overall, I think we had an incredible year, and I’m so proud of every single one of these girls. Our success is not measured by wins this year, but by character, leadership and a whole lot more.

The victory improved the Devils’ record to 6-5 in league play, with the team’s final game of the season set for Thursday against Summit. Steamboat finished the league season at 5-7 and will wrap up the season Friday in Lafayette against Centaurus.