In terms of wins and losses, this wasn’t the season the Steamboat Springs High School girls soccer team had hoped for.

But after 80 minutes of regulation play and two overtime periods, nobody will ever say this soccer team didn’t leave it all out on the field. 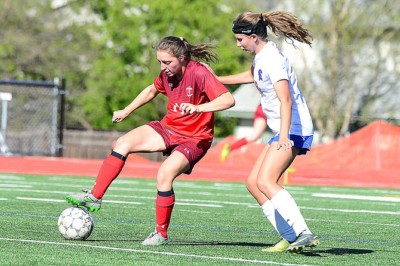 Steamboat Springs High School soccer player Teegan Ludwig pulls the ball back against a Centaurus player in Friday’s game in Lafayette. The Sailors and Warriors played to a 0-0 tie. Photo by John F. Russell

Steamboat and Centaurus battled through two 10-minute overtime periods before the game ended in a 0-0 tie in Lafayette on Friday. The game wrapped up the Sailors’ 2017 campaign.

“I think we all just wanted to go out there and give it all we could,” Steamboat Springs sophomore Lucy Wilson said after the game. “We obviously wanted a win on the board, but, more than anything, we just wanted to show that we really did play our hardest throughout our season. We overcame so many setbacks, and I think this game was a metaphor for our entire season. Lots of hard work, and maybe not the final outcome.”

Both teams had opportunities to earn the win in regulation. Steamboat’s Emma Meyer, Wilson and Katy Floyd all had chances in the first half, but none could beat the keeper. Centaurus also had a handful of chances that were turned away by the Sailors defense and keeper Leah Rowse.

But the biggest moment of the game may have come in the 68th minute, when Rowse was able to get a hand on a high shot before it found the back of the net.

The ball caught the cross bar as it bounced in front of the net before being cleared.

“Which one?” Rowse responded, when asked about her save. “Oh, the high ball — I knew immediately when they sent that ball in that it was a really big threat, so I just started backing up. When it got close, I just jumped for it, and I got my hands on it. Those are the worst kind of balls.”

Steamboat also had several opportunities in the final 10 minutes. The Warriors goalie stopped shots by Megan Salyer, Wilson and Delaney Moon. Sydney Graham sent a shot that missed by inches as it flew over the crossbar with a few minutes left on the clock.

In overtime, both teams had opportunities, but when the buzzer sounded at 100 minutes, neither team had been able to put the ball in the back of the net.

The Sailors would know. Friday’s game marked the third time this season the Sailors have played bonus minutes.

The team beat Battle Mountain only minutes into its first overtime game of the season, then fell to Battle Mountain in it’s second, with only three seconds remaining it the second overtime. Steamboat lost the game, 2-1.

“This game was a metaphor for our entire season. They worked extremely hard, and they inspired each other every step of the way,” Sailors coach Rob Bohlmann said. “They improved throughout the course of the game, but in the end, the one issue we continued to have was putting the ball in the back of the net.”

The game marked the end of Steamboat’s season. The squad finishes at 5-9-1 for the season, 5-7 in league play, and will miss the playoffs for the first time since the 2014 season.