Saturday’s game against the Summit Tigers in Frisco is one that senior Corey Petix will remember long after she has graduated from Steamboat Springs High School.

“I’m looking for more, but this was really big,” Petix said of her goal. “Just having the whole team come to me afterwards … it made me feel so good and it just boosted my energy. It gave me confidence to take more shots. It’s definitely a highlight of my season and I am going to remember this forever.” 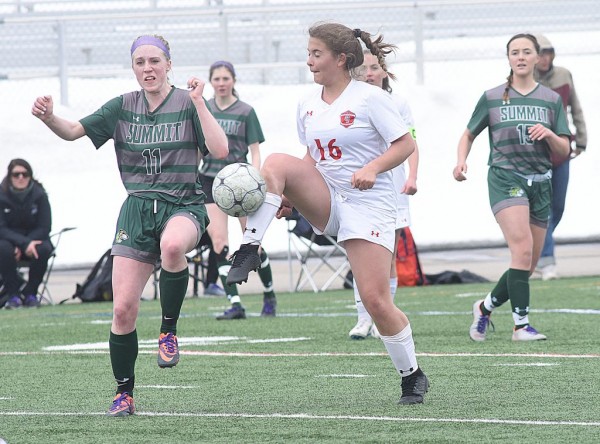 Steamboat Springs High School senior Corey Petix battles for a ball with a Summit player Saturday in Frisco. Petix scored in the game helping the Sailors collected a 3-0 victory for the team’s sixth straight win. Photo by John F. Russell

The goal was one of three the Sailors collected in a 3-0 win over Summit in Frisco on Saturday. Senior Rachelle Koly scored the team’s first goal at the 8-minute mark after being set up by a nice through ball from fellow senior Delaney Moon. Koly raced behind the Tigers defense and beat the goalie with a shot to the left side of the net.

Petix’s goal came at the 27-minute mark and gave the Sailors a 2-0 lead. It was set up by Lilli Armstrong to give the Sailors a 2-0 lead at the half. Armstrong had a breakaway up the line, and took the ball deep before making the pass to Petix, who had dropped back to the 6-yard line and was waiting for the cross. Armstrong heard her teammate calling for the ball, and hit Petix with the pass. Petix was able to find a lane through a shifting Summit defense and landed a hard shot just inside the post.

Steamboat’s final goal of the game came a the 52-minute mark when the Steamboat’s back line found Armstrong who was able to sprint past the defense and score.

The two-hour trip to Frisco comes in the wake of a three-game homestand that has turned the tide for the Sailors who opened the season with losses to Colorado Academy and Battle Mountain. On Saturday the Sailors hit the road to take on Summit for the second time this season. Steamboat won the first game 7-0, and completed the sweep when the players walked off the field Saturday.

The win extends the Sailors current winning streak to six games improving to 6-2 overall for the season and 4-1 in the Western Slope conference. The Sailors have outscored their opponents 25-6 in that stretch.

“It’s just amazing to see how the girls are working so hard for each other,” Bohlmann said. “It’s a great opportunity to have a situation like this where we are going into a big stretch, and we are utilizing 22 sets of legs, and they are playing for each other and the players that go in elevate the game. It’s just tremendous group effort.”