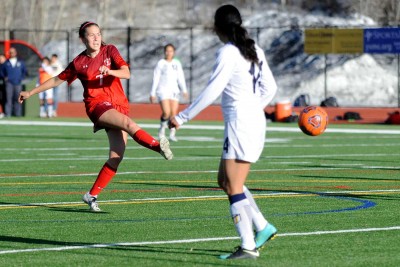 Stretching a game just to make it to the halftime senior night presentation wasn’t ideal, but the Steamboat Springs High School girls soccer team enjoyed every minute of it.

No. 11 Steamboat Springs (9-3, 7-2) defeated Western Slope opponent Rifle (0-9, 0-7) 10-0 before the end of regulation in the second half. Out of the nine goals scored, eight different Steamboat Sailors had a chance to knock them in. The final score was an own-goal by the Rifle Bears.

Steamboat senior Megan Salyer drove in the first goal off a pass to the middle of the goal. She shot the second one to the top right corner, where the Bears’ goalie lost her grip as the ball fell in.

Salyer was the leading scorer as the only Sailor with more than one goal, but tonight was the culmination of a yearlong battle with an ACL injury on her right leg.

“I got hurt during the first high school game last year, then played a couple of club games,” Salyer said. “I was hungry to get back into it.”

Salyer’s injury happened in the first home game against Glenwood Springs last year, which made this year’s 4-1 defeat of the Demons a sweet full-circle victory. The Sailors will face the Demons after spring break on Tuesday, April 30.

“It’s part of sports and Megan’s really done well as far as learning the lesson,” Sailors head coach Rob Bohlmann said. “You learn you really want what you don’t have when you get in a situation like that.”

It also made Salyer want more soccer. She’s committed to play on California Lutheran University’s junior varsity team next year, hoping to work her way up to the varsity squad in college.

But Cal Lutheran’s initial appeal came from its exercise science program. Salyer was inspired by her ACL injury to pursue physical therapy.

“I really enjoyed learning how the body works,” Salyer said. “I couldn’t lift my leg the day after it happened, and now I can run and still play.”

Salyer is a four-year varsity veteran and no stranger to scoring goals as an offensive player, but for some, the opportunity to score at the game against Rifle was unusual.

Steamboat senior Caroline Lupori has played most of this season in goal. She earned that spot after a year of playing the field on varsity but taking reps behind others before her.

“She gives the back four and forwards a lot of confidence,” Bohlmann said. “She’s calm, cool and collected. That brings a lot to the team. She organizes well, she owns the box and she has that experience.”

Tonight, Lupori stepped out of the box back onto the field, tapping in the team’s ninth goal. It was her second goal as a varsity player. Since the night was filled with one-touch passing and easy goals, the crowd remained unfazed.

“I guess it was the ninth goal, so no one really cheered or anything because it was my first and only goal this season,” Lupori said. “But it was fun to be up there and diss the other goalie.”