Two goals from senior Audrey Teague helped Battle Mountain take Round 1 in the Sailors’ long-running rivalry with the Huskies. Despite losing the game 2-0, Steamboat head coach Rob Bohlmann remained positive as he talked about the team’s growth in the last week. 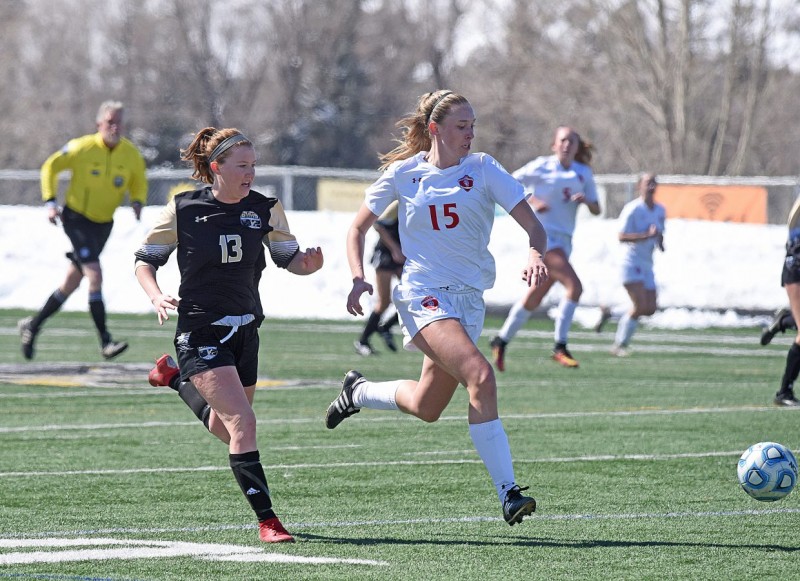 “The girls have been tremendous,” Bohlmann said. “The energy in the training has been good, and we are just going to look to get better every day. We will keep working to become the best version that we can possibly be.”

On Saturday, Teague provided all the offense Battle Mountain would need. She scored with under 10 minutes left in the first half after Steamboat was called for a penalty in the box. Teague placed the ball just out of the reach of Steamboat goalkeeper to put her team up 1-0. Teague added a second goal at 54 minutes on a hard shot from just outside the box that ricocheted off the post hitting the back of a Steamboat player before going into the goal. The Battle Mountain senior almost collected the hat trick in the final minute, but the ball just missed the mark hitting the left post hard, and bouncing safely away.

The snow-covered field in Steamboat has resulted in a slow start to the season for the Sailors. The team got onto a field for the first time March 15 during a training session at an indoor facility just before the team’s opening game against Colorado Academy.

Most of the team’s practice time has been spent inside in the gym, but on Friday and Saturday crews were working to get the snow off of Gardner Field in Steamboat. Bohlmann said not having the field has impacted the team, but that the team has to overcome the situation.

“It impacts us, but we can’t go there,” he said of field in Steamboat. “We got to go to work everyday. If you go out and it doesn’t quite go as we want it, you have to dust yourself off and keep working.”

Because of the weather and the snow, Steamboat’s schedule is a little confusing this week. If the field is available, the team is set to play at 6 p.m. Thursday against Aspen. Bohlmann said he is also waiting on word for when Steamboat will make up a game against Eagle Valley that had to be postponed last week. The place, day and time of that game is still up in the air.

The original article appeared on Steamboatpilot.com. To reach John F. Russell, call 970-871-4209, email jrussell@SteamboatPilot.com or follow him on Twitter @Framp1966.