The golden opportunity for the game came in the final minute of overtime Saturday for the Steamboat Springs High School girls soccer team, but it turns out as monumental as it may have felt at the time, the decisive moment for the season had already come and gone. 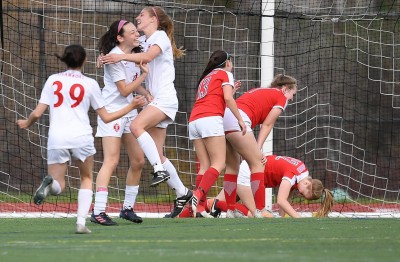 Steamboat’s Rachelle Koly, 4, celebrates with teammates after a late-second half goal tied Saturday night’s game against Centaurus. The game ended in a tie, but that wasn’t quite enough for Steamboat in the RPI rankings and the team ended up just outside the state playoffs.
Photo by Joel Reichenberger

The Sailors rallied from a two-goal deficit to tie Centaurus, then just missed a chance to win the game with 30 seconds remaining in overtime, a clear opportunity with the goalie beat and the defense out of position clanging off the crossbar.

“The ball bounced out instead of in,” coach Rob Bohlmann said. “You work so hard. You do everything in your power. You come so close, and it just doesn’t quite go your way.”

The buzzer sounded moments later and in the moment, it seemed the inch or so that kept that shot from being a game-winner, was not just the difference between winning and losing a game, but potentially making the 32-team field for the Class 4A state playoffs.

Indeed, the bracket for that tournament was announced Sunday, and Steamboat was left out, No. 33 in the RPI rankings that decide most of the field.

RPI doesn’t decide every sport, however. Every league in the state is guaranteed two qualifiers, and Sunday, that meant two teams getting boosted from deeper in the rankings into the tournament field.

Crunch the numbers and while a win Saturday would have bumped the Sailors to No. 31 in RPI, they still would have fallen just short of making the tournament — the first team out instead of, as it was, the third.

Still, a day later Bohlmann said the team’s game Saturday was a fitting farewell to the spring season, a supreme effort from a resilient group.

Centaurus built a 2-0 lead in the first half before Steamboat found an answer from sophomore Holland Reece. It got another, tying the game, from Rachelle Koly with seven minutes remaining.

It was an up and down season for the Sailors, one capped by an early 2-1 win against rival Battle Mountain. A few games loom large in retrospect, including an 0-3-1 stretch to close the season. The team finished 8-6-1.

“In 13 of our 15 games we had to battle,” Bohlmann said. “We were never necessarily the superior team, but we were able to grit out some really good results, and we dropped a couple of games we wish we could do over. We were in every game, and that really defines the character of this team. They kept playing until the end.”