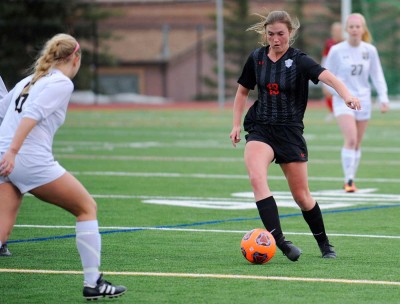 Steamboat Springs High School sophomore Keigan Rand dribbles the ball against a defender in the game against Battle Mountain on Tuesday, April 16, at Gardner Field.
Photo by Leah Vann

Tougher competition is where the weaknesses shine through.

Steamboat Springs High School (9-2, 7-1) has won nine straight games since its last meeting with Battle Mountain (9-1, 7-0), where the Sailors lost 2-0. For the second time this season, the Huskies shut out the Sailors 4-0.

Although the Sailors broke its initial scoring drought and dominated the competition, they struggled to take advantage of opportunities on goal and allowed a few too may breakaways on defense.

“There was growth, and it shows in some of the things that we were tracking,” Steamboat head coach Rob Bohlmann said. “We had more shots on goal than the first game, but we’ve got to look at how we can create better, quality opportunities against a team that is well-organized defensively.”

Two goals were scored within the first 11 minutes of play.

Sophomore Gabby Caballero was the first to get through the Sailors’ defense on a breakaway run, beating Sailors junior Sydney Graham along the right side to knock a goal to bottom left corner.

The Sailors took a blow on the second goal. Senior Caroline Lupori collided with a Battle Mountain player during a shot on goal, falling to the ground. The ball rolled directly to foot of sophomore Bailey Murray for an easy goal, 2-0.

Junior Molly Quinn-Clynes took over in goal for the Sailors, flying through the air to deflect a shot within minutes of joining the game.

But Husky junior Kate Mitchell faced Quinn-Clynes head-to-head on a breakaway down the right side, shooting for the bottom left corner to score the third goal at 40 minutes and 42 seconds of play.

The Sailors were down 3-0 at halftime and the second half wouldn’t play out much differently. While Steamboat seemed to narrow opportunities on defense, the offense couldn’t quite close its opportunities.

The two teams sit at the top of the Western Slope and arguably haven’t seen much competition from teams other than each other this season. The Huskies’ defense is where they truly shine. The score doesn’t always credit the defense, especially in a high-scoring game, but opportunities only came because the Huskies were able to disrupt the Sailors and stay one step ahead on offense as a result.

“We had a lot of practice just connecting and not playing forward and made getting goal a No. 1 priority,” Mitchell said. “Connecting first, and then it comes when it comes, rather than just forcing it.”

“I thought the game was a lot closer than the score. Steamboat played really well,” Cope said. “Sometimes in a 4-0 you can play everybody, and you can get everybody in, and we couldn’t do that at all. Our starters had to finish that job because Steamboat was pressuring us all the way to the end.” 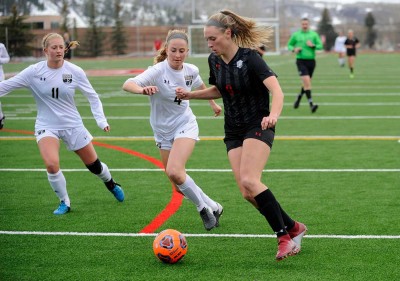 Senior Rachelle Koly utilized her speed for multiple opportunities on goal, but she didn’t hit the net; knocking shots over the goal or hitting the posts. Senior Delaney Moon and junior Grace Drobek also had shots on goal that didn’t make it through.

“It was the fact that even though we would attack and take ’em on, we needed to be a little more unpredictable,” Bohlmann said. “Unlock them and find a better opportunity.”

Mitchell added the Huskies’ final goal towards the end of the game to seal the deal.

“It was a combination of a couple of things. We never established the rhythm and the tempo we wanted to,” Bohlmann said. “On the other hand, Battle Mountain is very good. They played a tremendous first half, and then they settled in and made it difficult for us to get behind. And when we did, they still defended it well.”