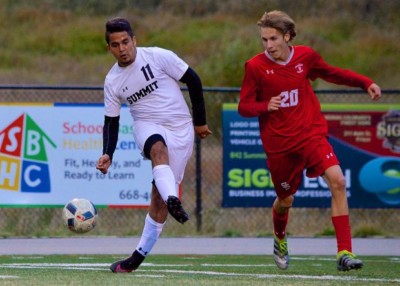 The Steamboat Sailors Men’s Soccer team made their way to Summit High School on Thursday night prepared to come back from a crushing loss to league rival Battle Mountain on Tuesday Night. The Sailors had one day to recover from the emotional and difficult battle before hitting the road. These short turnarounds are common in fall high school soccer season, as teams push to get games into a shortened season before the snow falls.

On this night, the Summit Tigers had the Sailors number. Summit Senior Cole Catron was able to find the back of the net twice, has he lead the Tigers to a 4-2 win over the Sailors. Steamboat has now fallen in the league standings with a 4-2 League record and 6-3 on the season.

Summit wasable to capitalize in the first 5 minutes with a goal off a corner kick in the first 5 minutes. The Sailors have been soft on corners in the first half of the season, something Coach Rob Bohlmann is sure to address in the coming week. A second goal by Summit in the 31st minute, put the Tigers in the drivers seat. It was then that senior striker for Steamboat, Cruz Archuleta, finally found his way to score his 11th goal of the season. In the 37th minute, Archuleta was able to score on a breakaway opportunity to bring the game to 2-1. The Sailors were able to hold off a few quick counters by the Tigers but were finally undone just before the half when an own goal, off a bad clearance from the Steamboat back line, found the back of their own net to make it 3-1 at half.

The Sailors came out inspired in the second half, logging 12 shots on goal, while Summit was only able to muster 4. Junior Summit keeper Kyle Wertz had two clutch stops, including one on another fast-break attack from Archuleta and that kept his team comfortably ahead. In the 67th minute, Catron again got the ball, this time on his strong side, and sent a right-foot rocket into the left corner to give Summit an unprecedented 4-1 lead.

But, like the first half, the euphoria was short lived. Steamboat scored less than a minute later 0ff a Will McConnell goal. The game was intense, yet clean, but as teams tired, it started to get sloppy. Wertz had another heart-pounding stop on a breakaway from Archuleta in the 74th minute, followed by yellow cards for Steamboat in the 78th and 79th minutes.

When the final whistle blew, the Sailors had fallen to Summit 4-2.

The Sailors will head back home for a 5 game stretch of home games, that will kick off Tuesday night at 6pm against the visiting Glenwood Springs Demons, who the Sailors defeated in the first meeting, 4-1.