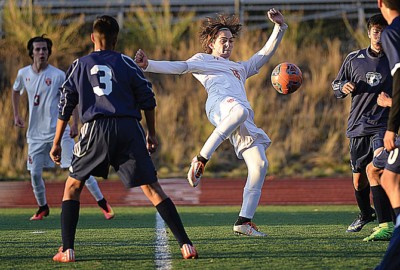 Ross VanHara takes a crack at the ball against Rifle.
Photo by John F Russell

“The challenge when you are not playing the teams at the top of the league is to maintain a high level of play,” assistant coach John Cardillo said. “One of our goals was to play at that high level and to get better as the game goes on. I think we have been able to do that in our last three games.”

Steamboat has faced Glenwood, Palisade, and Rifle in the past three games and those teams have a combined record of 4-20.

But the Steamboat coach said it isn’t only the opponents that determine how well a team is playing, and he has been impressed with the way the Sailors have maintained a high level of play against those young teams and has avoided looking past any of those opponents.

Last week Eagle Valley, a team currently half a game behind the Sailors in the standings, went to overtime with Rifle before pulling out a 2-1 victory.

In the latest stretch, Steamboat has netted 21 goals and has not surrendered a single goal and very few opportunities. The big leads have allowed the Sailors to rest players, and also let them play different positions. Starting goalkeeper Andrew McCawley has been pulled in the 70th minute and inserted back in the game in a forward position, and center back Alex Coffey has moved up front, scoring two goals in the first two games. On Tuesday he had a shot that hit the post.

“I’m really happy with the way the guys are playing right now,” Cardillo said. “ These guys are playing a lot of one and two touch soccer — it’s creative and it’s fun to watch. The goals are coming naturally. We haven’t had any blooper-type goals in the past three games, they have been created by our players.”

On Tuesday, Steamboat took an early 2-0 lead against Rifle behind two impressive goals from sophomore Quinn Connell. Once they Bears surrendered the lead, Steamboat used an aggressive attack to keep the visiting team on its heels.

“We are still very young and still learning that we must adjust to the speed of the turf or the kick of a goalkeeper a little sooner and not let so many players in (our defensive zone),” Rifle coach David Romero said. “I thought both teams played rather well, but our inconstancy comes from our youth and inexperience.”

Connell’s first goal came 12 minutes into the game after he used some fancy footwork to beat a Rifle defender and placed a shot to the right side of the goal past a diving keeper. The next came 16 minutes into the game after he was set up by Will Beurskens. Cruz Archuleta made the score 3-0 in the 27th minute after heading a nice crossing pass from Ross VanHara into the back of the net.

“This team is full of some excellent goal scorers I guess I’m just the lucky one that happens to be in the right place at the right time,” Archuleta said about his two-goal night. “Everyone sees each other and we are communicating well.”

Steamboat shut the door on the Bears in the second half, as Archuleta (43rd minute), Ross VanHara (50th minute) and Murphy Bohlmann (51st minute) all added goals. McCawley only had to turn away a hand full of shots in the game as the Sailors rolled to a 6-0 win.

The players and coaches expect things to get a little tougher, as they prepare to face Eagle Valley in a game that will have a huge impact on the league standings a week from today. Eagle Valley (6-2) is in third place just half a game behind the Sailors. Steamboat beat the Devils in the teams’ first meeting a month ago, but with the league title within reach this one should be a big game. The Sailors then will have another seven days to prepare for Summit, a team that has slipped the past few weeks in the standings after beating the Sailors 4-2 in a windy game earlier this year. On Tuesday, Battle Mountain topped Summit in a 7-4 game in Summit.

If things go as expected in the league the next few weeks the league title might be on the line when Steamboat travels to Edwards for the final game of the season Oct. 20