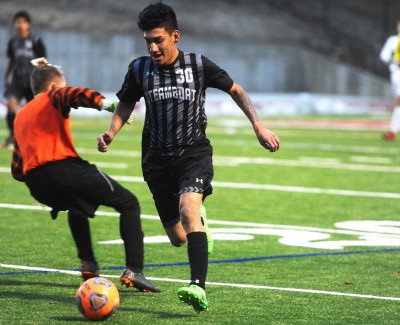 “Today’s was all about forward motion and finding a rhythm,” Sailors head coach Rob Bohlmann said. “And coming off Saturday, the vibe was not great, and we’re getting ready for the last week and end of the season.”

Two minutes into the game, senior Riley Moore gave senior Quinn Connell a wide-open shot, passing a ground ball just ahead of him to launch to the top right corner of the net.

Junior Oliver Capparelli was next, dribbling the ball downfield before sneaking a ground shot from the right to the left corner.

Up 2-0, the Sailors stayed in stride on offense. Junior Daniel Lopez was dribbling downfield when he realized there was no one in sight on the Devils’ defense. It was a long shot, but a good one, and his teammates knew it. Behind him, a couple of Sailors shouted, “Shoot it!” Lopez catapulted a shot from over 20 yards out, nailing the top left corner of the net. He threw his arms up in celebration as the crowd roared, and in less than a minute, he came back with a totally different move.

“That’s his personality, he plays with a lot of flare. It’s fun to watch. The guys feed off that. When he has those balls, we don’t want to go and clog. Let him have space to go one versus one. He adds a different dynamic to our team.”

Lopez got fancy with his ball handling, drawing the goalie out of the box. He’d sneak behind and gradually tap the ball in goal for a 4-0 score. He smiled as he remembered the trick.

“More easy and fun for the people and the fans,” Lopez said.

Connell nabbed his second goal of the night with another far-out shot off a penalty free kick passed by Moore to draw a 5-0 score. Junior Joe Westermeyer closed the half on an exciting note, knocking in his first goal of the season, 6-0.

Following halftime, senior Murphy Bohlmann came out of the goalie position to take the field. He wasted no time scoring two goals, taking the first one as a face-off with the goalie within the first seven minutes. Junior Kevin Kaster moved from defense to offense, joining Bohlmann downfield, passing the ball back and forth to throw off the defense until Bohlmann could take his second shot, 8-0.

Senior Riley Moore and Phenix Tatge grabbed the final goals, and Eagle Valley scored one with 23:11 left in the game.

It was a night where Steamboat Springs got to show its depth on the roster, giving many their shots on goal. Even if they didn’t score, they were a part of a fun win.

“It feels great being up on top and knowing that your team is still just as good as they ever were,” junior Bryce Zetzmann said. “And proud to have the badge of the Steamboat Sailors on your chest.”

Steamboat Springs next takes on Summit in a home game at 6 p.m. Oct. 16.