STEAMBOAT SPRINGS — After two consecutive 9-2 victories, Steamboat Springs (8-2-1, 6-2-1) tested itself in a nonconference matchup against Evergreen (4-7, 2-2) on Saturday. 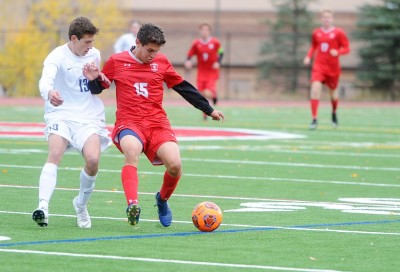 But don’t let the Cougars fool you by their record. They are fighting for a postseason spot at No. 36 in the RPI standings, whereas the Sailors are sitting comfortably in playoff position at No. 17. A victory is what they needed, and just what they got, winning 4-3.

After a 30-minute rain delay in the 47-degree weather, both teams jogged out on the field to warm their muscles.

It didn’t take long for the Cougars to launch their first goal. Senior Ryan Gutberlet took a pass from the outside and hit the left side of the net for the first goal seven minutes into the game, but less than four minutes later, Sailors junior Daniel Lopez had an answer.

Lopez drove downfield, beating everyone in his path. He shot the ball comfortably in the bottom corner of the net, tying it up 1-1.

With 21 minutes and 44 seconds left in the first half, Steamboat Springs senior Murphy Bohlmann took his shot. Bohlmann’s shot soared through the air for a few seconds before hitting the top left corner of the net, giving the Sailors their first lead 2-1.

But the Cougars continued to challenge the Sailors’ defense. Sophomore Blaine Watkins knocked in a second goal to tie the game up at halftime at 2-2.

In the 9-2 win over Rifle, the Sailors were tested to maintain their intensity going into the second half. But against Evergreen, intensity was more of a necessity and it wasn’t quite there until the final minutes.

“The difference is in the first half. We created a lot of opportunities,” Steamboat Springs head coach Rob Bohlmann said. “(We) lacked a bit of hunger to capitalize a bit more. We allowed them to get back into the game. The urgency we saw towards the end of the game, maybe if we had that little more consistently, it maybe would have made a bit of a difference.”

The surrounding mountains disappeared from view as the rain started to pour again in the second half. Junior Nick Graziano added a goal within the first minute of the second half to put the Cougars ahead 3-2.

Lopez and Murphy Bohlmann broke free in one-on-one battles with Evergreen’s goalie, sophomore Keaton Gressman, but Gressman stayed tight or got lucky. Shots went wide or directly into his hands.

Gutberlet added his second goal of the game with 16:02 left, running to face the Evergreen crowd as he threw up his fists in celebration for a 4-2 lead. But the Sailors wouldn’t let up.

Senior Riley Moore was finally able to put the Sailors back in contention with 9:47 left in the half 4-3. Lopez added a powerful shot up the middle, which hit the football goal post and bounced in the back of the net. The crowd left in the stands screamed and stomped with excitement, only to realize the ball was on the outside of the net.

The Sailors kept fighting, taking three shots on goal. Despite the crowd’s desperate screams, they’d each fall wide, or into Gressman’s hands.

“We have all the roles within the team,” Bohlmann said. “Just has to come down to us being a little sharper. Everybody within their role brings a little more intensity, it can be game-changing.”