It took a while for Steamboat Springs High School girls soccer team to crack the Eagle Valley defense. But, after the Devils lost their starting goalie, the Sailors crushed the net for an 8-1 win. 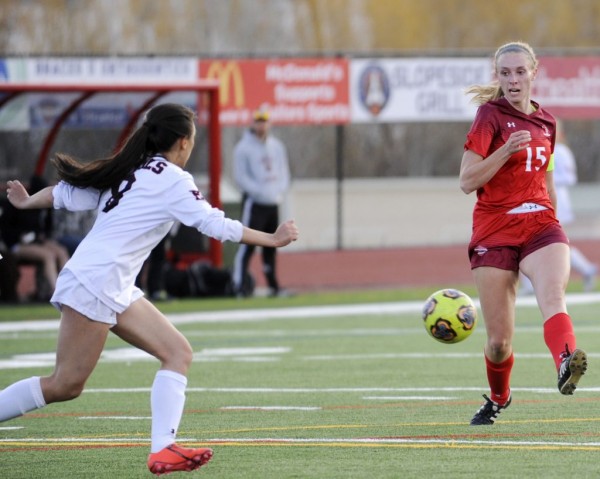 Steamboat senior Delaney Moon made the first punch, facing a one-on-one with the defender before taking a shot just past the defender’s stride, a ground ball that slid to the left of the Devils’ goalie senior Kalista Farmer.

Following a 1-0 lead, Steamboat sophomore Lilli Armstrong drove toward the goal, colliding with Farmer while lining up a big shot.

Farmer had easily kept the Devils in contention through the first 27 minutes of play, but she limped off the field with the help of her coaches to never return.

“It’s really unfortunately for the goalkeeper with the injury because she was heroic,” Sailors head coach Rob Bohlmann said. “They were feeding off of her, and that really kind of changed the momentum. But, defensively, they were really organized and created some problems we had to solve. Eventually, it opened up for us.”

Then the Sailors started to pound the net with junior Valeria Duarte-Munoz in goal. Moon recorded her second goal, then sophomore Haley Moss followed. Moon added another up the middle off an assist from senior Corey Petrix for a 4-0 lead, and Devils senior Zoe Booth knocked in a goal just before the half for a 4-1 score.

The Sailors continued to pull ahead 6-1 in the second half with a pair of back-to-back goals by senior Megan Salyer.

A close ball hit the Devils’ goal post and bounded across the line. Senior Rachelle Koly came charging in, tripping over the ball, then Moss punched in and had the final say to knock in her second goal, 7-1.

The final goal came off a pass from Armstrong from the right to Steamboat junior Sydney Graham, who punched it up the middle to close the game 8-1.

Steamboat has a busy week of upcoming games, including two more this week against Eagle Valley and Palisade. The depth on this team is evident by the variety of different goal scorers from game to game and its ability to switch out defenses with the same strong outcome.

“We continue to use 20-21 players. Today we used 22. It’s amazing. It shows the depth and the quality of the players we have,” Bohlmann said. “The girls that don’t start that come in off the bench, they’re not subs. They’re game changers. That’s a mantra that is really working well for us, and they believe in it and work hard for it.”