Steamboat boys soccer off to strong start after wins over Glenwood, Palisade

STEAMBOAT SPRINGS— Sailors soccer seems to be getting off on the right foot. 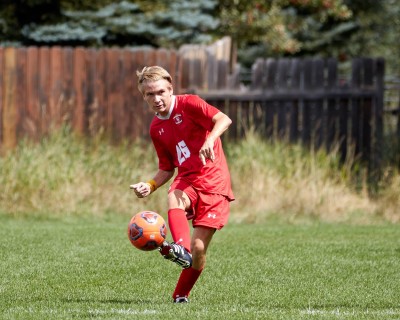 Or left, either works.

The Steamboat Springs High School boys soccer team kicked off its regular season Thursday with a 3-2 road win in Glenwood Springs, a place that marked a low point for the team last season.

“Over the years, Glenwood has been a difficult place for us to win,” assistant coach John Cardillo said. “And last year certainly we had really high hopes and a really strong squad. And we went in there and lost a game we should’ve won. So, to go back there and just start the season right at the place where your low point was last year and come out with a really good result, I think it just puts us in a really good spot.”

The Sailors were down 2-0 at halftime, then scored within the first 15 minutes of the second half. Steamboat went on to add two more goals over the course of 15 minutes. Senior Murphy Bohlmann and junior Daniel Lopez scored the first two while the third was an own goal on the other team. Lopez’s shot ricocheted off a defender for the final goal.

But Saturday’s game against Palisade at home on Dudley Field was a different story. The Sailors found the back of the net every chance they got for an 11-1 score.

“One thing that happens in soccer a lot is you can play down to your opponent,” junior Riley Moore said. “And today we came out and we played at our level.”

Moore finished the day with five assists and two goals, two of those assists went to Lopez, who didn’t say much except to thank his teammate.

“For Riley, nice passing, it helped me finish,” Lopez said.

Moore moved to Steamboat from Sedalia, Missouri, but he’s already showing he can fit nicely into the offensive scheme by getting the ball in the right place at the right time.

“He’s very technically gifted,” Cardillo said. “So, he can have his head up with the ball at his feet, he can always see the field, and I think that’s a real focus of his. He enjoys being the guy that serves.”

Moore tributes his assists to his knowledge of the game, coupled with a cohesive midfield unit.

“Once everyone works together there’s just infinite space in the middle,” Moore said.

Lopez is soft-spoken about his game but aggressive on the field. He fought two defenders midair on his second goal for a long shot up the middle. He’s active on the field with his extensive footwork, able to use his left or right for shooting, pushing and weaving his way through defenders.

“He’s a natural, absolute natural talent with the ball at his feet,” Cardillo said. “He’s primarily a left-footed player, but he’s starting to use his right foot and becoming really, really dangerous.”

Bohlmann emerged as a top scorer for the Sailors, finding the net for three goals, including two in the first half. For the Sailors, it’s comforting knowing Bohlmann is back from injury and ready to play with no limits.

“This is his second full-match play in quite a long time,” Cardillo said. “So, it’s good to see him find his goal-scoring touch; he scored a lot of goals last year.”

Cardillo said the core unit of the team’s personnel doesn’t differ much from last year, but some of the younger players will be stepping up, including junior goalie Juan Campoverde, who allowed just one goal in Saturday’s contest.

With a 2-0 start under its belt, Steamboat looks ahead to tougher competition Saturday, Sept. 8 against No. 2 in Class 4A Centaurus. As of Aug. 27, the Sailors were receiving votes to crack the top 10 in Class 4A.

“It’s a pretty good feeling [to be 2-0],” Moore said. “One of our biggest challenges is on Saturday, so we need to forget about the first two games and look at the third game.”

Original article from SteamboatToday.com by Leah Vann. To reach Leah Vann, call 970-871-4253, email lvann@SteamboatPilot.com or follow her on Twitter @LVann_Sports.