STEAMBOAT SPRINGS — There is no room for taking it easy this late in the soccer season, and the Steamboat Springs High School boys team made that clear in its 9-2 victory over Rifle on Tuesday, Oct. 2. 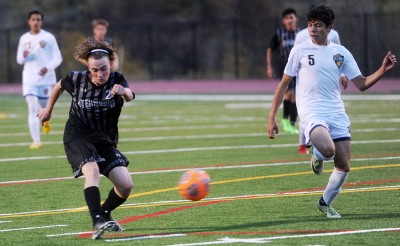 The Sailors stand at No. 3 in the Western Slope League with a 6-2-1 league record, so every win counts, and there’s always room for improvement.

In games like these, Steamboat is able to focus on itself and experiment with new schemes for the tougher opponents ahead.

“Coming out of the second half, we felt like our intensity had dropped,” Sailors assistant coach John Cardillo said. “So we worked on raising the intensity back up again. Which, I think we did, and varying our attack a little bit. Too many balls right over the top, down the middle, so trying to vary that up a little bit and get some runs out of the midfield.”

Those outside plays took shape throughout the game. The Sailors weren’t just driving down the middle, they were tricking defenders on the Bears’ team.

Junior Daniel Lopez had two tricky goals in the game. In the first half, he’d take the ball on the outside and sneak it in with a light tap to the corner of the net straight ahead. In the second half, he’d launch a fast ground shot from the left side to the right corner.

Senior Murphy Bohlmann also had two goals on the night, one of which broke apart Rifle’s defense. Sailors senior Riley Moore had the ball up the middle, drawing the goalie out of the box far enough to leave it wide open. Moore snuck the ball to Bohlmann on the right side, who shot successfully against a desperate defender who had taken his spot in goal.

Seniors Quinn Connell and Gabe Davis, junior Kevin Kaster and Moore each added goals of their own. The Sailors had led by a 5-2 margin at halftime.

“Quinn Connell, he was impressive on both sides of the ball,” Cardillo said. “He scored twice and broke up defensive plays.”

Bohlmann, the team’s leading scorer, also played defense in the second half, taking his spot in goal, a position he hasn’t been able to play for a while due to wrist injury.

“Murphy is a goalkeeper and has been for a long time,” Cardillo said. “He was just kind of out of commission while his wrist was broken, but that’s always something we have in our back pocket.”

Cardillo said Bohlmann’s perspective from both sides of the ball is an advantage in goal.

“He spends a lot of time in the field,” Cardillo said. “He knows from a field player’s perspective when they’re starting the attack. Obviously very skilled with his feet, so it’s nice for him to be able to play back to him at any time. Love it when our keepers can use their feet.”