Soccer a family sport for Bohlmanns

SteamboatToday.com — Gabrielle Bohlmann didn’t hesitate when asked to name her favorite memory of playing soccer for Steamboat Springs High School. It wasn’t one moment, exactly, but an entire season of playing alongside her younger sister, Natalie Bohlmann. 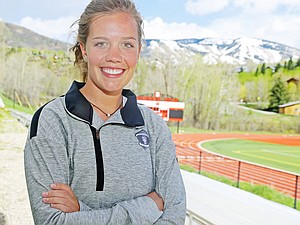 It was the spring of 2013. Gabrielle was in her senior season; Natalie, an upstart freshman. The girls played the same position in the middle of the field, their father, Rob Bohlmann, always patrolling the sideline as the Sailors’ head coach.

Gabrielle, now an interior design student at Colorado State University with her soccer career mostly behind her, remains close by in support of her sister, who leads the Steamboat girls’ soccer team in goals this season (15) heading into Thursday’s Class 4A state quarterfinal game at top-seeded Lewis-Palmer (16-1 overall).

“It’s exciting for me to see them work hard and have it pay off,” Gabrielle said of the 2016 senior class, which includes Natalie. “They’ve all played together for so long, so it’s cool to see them have a great finish.”

Gabrielle has been to a handful of games this season and will be in attendance when the No. 8-seeded Sailors (16-1) take on the mighty Rangers at 6 p.m. Thursday in Monument. She went to both of the team’s playoff wins this postseason, and as exciting as those were, her favorite moment this spring was the Sailors’ 5-0 blasting of rival Battle Mountain in March.

Natalie Bohlmann, on the other hand, is too anxious about the future to ponder the past.

“It’s just super exciting to see this group get so far, because we have all worked so hard together for so long,” Natalie said. “We are all very excited, and we are really ready, but at the same time, we are very nervous. You are always going to have nerves in a big game like this.”

Rob Bohlmann has coached the Sailor girls since 2002 and the boys’ team even longer. Soccer is part of the Bohlmann DNA, although Rob swears his children — which includes his son, SSHS freshman Murphy Bohlmann — always had the opportunity to walk away.

Gabrielle, when she was young, did just that and stepped away from the sport. This only lasted a year, however, and soon enough, the pull had her back on a soccer field. Her younger siblings have been even more gung-ho about the sport than she.

This family sport also extends to Caroline Bohlmann, Rob’s wife, who coached much of the 2016 senior class when they were young.

“It’s what dad does, but all along, it was their choice,” Rob Bohlmann said. “I guess you can say we are a soccer family. Especially Murphy, that third one, who was drug around to more games than his fair share.”

He did praise both his daughters, however, for being the constant. Natalie, especially, has been able to handle whatever side of Rob Bohlmann shows up to practice that day — the coach, or the father — and this consistency has translated into remarkable play on the field.

“He definitely goes a little bit harder on me, but I like that,” Natalie Bohlmann said. “He definitely expects more from me. He knows my goals more, I guess, and really pushes me to reach those.”

When the season ends, Natalie plans to follow in her sister’s footsteps and attend CSU. She might even play club soccer for the Rams.

But for at least one more night, Rob Bohlmann still has one daughter playing soccer in high school. And when the Sailors lace up their cleats to face Lewis-Palmer Thursday, you can bet there will be a few more Bohlmanns anxiously watching from the side.

“You have to wear two hats, for sure,” Rob Bohlmann said of coaching his children. “With my first daughter, Gabrielle, and Natalie, both of them, they were the strong ones.”