SteamboatToday.com— The smile that spread across senior MacKenzie Gansmann’s face Wednesday after she scored the game’s first goal said it all. The expression was one of both happiness and relief, and it sent a loud and emphatic message that it was going to be a good evening for the Steamboat Springs High School girls soccer team. 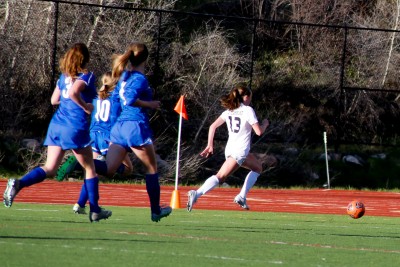 Gansmann scored less than eight minutes into the game, and it was smooth sailing from there on for Steamboat, seeded No. 8, en route to a 6-1 win against No. 25 Longmont (6-10) at Gardner Field in the first round of the Class 4A state playoffs.

It was the first time Steamboat has hosted a playoff game since a first-round loss in 2009. Wednesday’s win gives the Sailors playoff victories in back-to-back years, last season’s first-round upset of Montrose having been the first since 2006.

“Some days, it just clicks. And I think for these girls, this team, we’ve been clicking for a long period of time,” SSHS assistant coach Erin Early said. “These girls just respond so well, and they get it. They articulate it well to each other, so it’s not just coaches talking to players. It’s just been a long-going journey of preparation for tonight, and it paid off.”

Up 1-0 after Gansmann’s early goal, the Sailors added a second in the 14th minute, with senior Natalie Bohlmann deflecting the ball into the net off a Gansmann corner kick. About 10 minutes later, senior Logan Sankey scored, again partially set up by a Gansmann corner kick, to make it 3-0 at halftime.

The message SSHS head coach Rob Bohlmann gave the team at halftime was to start over. A year ago, in the second round of the state playoffs, the Sailors had trailed Battle Mountain 2-0 before rallying for the tie. The Huskies pulled out a 3-2 win, but Steamboat took something from that game, a lesson about never letting your guard down.

“We have been on the other side of sitting and realizing this game isn’t over, so I have full respect for Longmont in realizing at halftime this game is not over,” Early said. “These girls just played absolutely out of their mind. They have been so prepared. We have consistently talked a lot about character and the mental approach and just physically playing our game, which we have been doing this entire season.”

The Sailors made sure there was going to be no Trojan comeback in the second half. Bohlmann scored less than seven minutes into the period and completed her hat trick with another goal in the 54th minute to make it 5-0.

Gansmann added a second goal with 15 minutes to play, pushing the lead to 6-0. Longmont sophomore Sam Wiley put the Trojans on the board with less than nine minutes remaining, a Hail Mary of a kick that managed to sail over the fingertips of SSHS goalie Ocoee Wilson. It was the first goal the Sailors had given up since April 12, a stretch of five consecutive shutouts.

Steamboat Fans showed up in force against Longmont. What a great 12th man!

Next, Steamboat (15-1 overall) will face No. 9 seed Silver Creek (11-4-1) on Saturday in the second round. The Sailors will again host, with game time at 10:00am. Be sure to RSVP on Facebook and bring your friends!

“We have to forget about this game and go on to the next game,” Gansmann said. “We just have to have the same approach, because I feel like we did a really good job coming into this game. I feel like as we carry it over, we should have some good energy.”