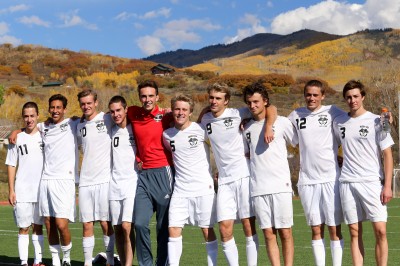 Saturday was Senior Day in Steamboat. The Sailors came out strong in the first half, in what would be the Seniors last game at Gardner Field. But with numerous opportunities to finish, the Sailors just could not seem to find the back of the net. After halftime, and all the festivities, the Sailors got back to their winning ways. After a take down in the box, Jack Salyer netted the first goal for the Sailors from the PK spot(48′). Soon after a Second goal was added by Senior Nathan DePuy(62′). The third goal was put away on a great cross from Senior Brody King to Senior Hector Lopez(72′). The final goal of the game came just three minutes later from Charlie Beurskens(75′).

The 4-0 win for the Sailors keeps the Sailors in third place in the league as they fight for a playoff spot atop the very tight Western Slope League. Steamboat will finish their regular season on the road at Eagle Valley (Tuesday) and Moffat County (Thursday).