Second half lifts Sailors over Bulldogs 3-0 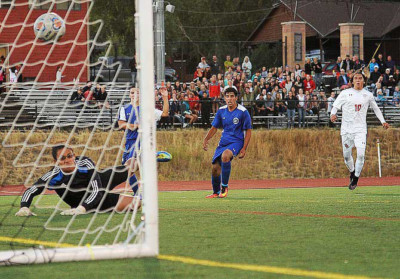 VanHara played him the ball then ran for the goal. Connell played it back and VanHara, only a few yards out, put it away, clean and hard into the net.

“It was pretty easy because of the work of my teammate, Quinn,” VanHara said.

It was a pretty play and a sparkling goal — the only time Bulldog goalie Daniel Moore was straight up beat — and even with nearly 20 minutes remaining, it put the game on ice for the Sailors.

“We knew we had to work harder after the first half,” VanHara said. “They’re a great team and always a good challenge, but we knew if we possessed it and passed it around, they’d get tired. They did, and we got a few more possessions and created more chances for ourselves.”

That goal was one of few clean shots attackers from either side earned on a gritty night of Western Slope soccer, but it most clearly showcased the difference between a win and a loss.

His first goal was in by an inch, deflecting off Moore’s hands as he dove and came close enough to touch the shot, but not stop it. That gave the Sailors a 1-0 lead heading into halftime.

“They had some pretty hard shots,” Moore said. “I got my hands on pretty much all of them, except the last one.”

On the other end, Steamboat goalie Andrew McCawley faced his own onslaught, especially in the first half, but he just managed to hold off half a dozen strong attempts.

VanHara’s goal symbolized Steamboat’s second-half control after a first half that was a few bounces from a variety of radically different results.

“We wanted to get pressure, and we kept lanes, stayed in our positions and we were talking in the first half,” Bulldog coach Harry Tripp said. “After that second goal, we fell apart a little bit. You could see the gas starting to fade a little bit.”

The win was Steamboat’s first of the year and put the team back on track after a lopsided season-opening loss Saturday at Mullen 7-3. The team next plays Thursday on the road at Glenwood Springs.