Salyer strikes in 2OT to give Sailors win over Eagle Valley

The kick looked a bit like desperation as the clock rolled into the final minute of play in overtime, but Steamboat Springs High School senior Jack Salyer assured everyone he knew exactly what he was doing. 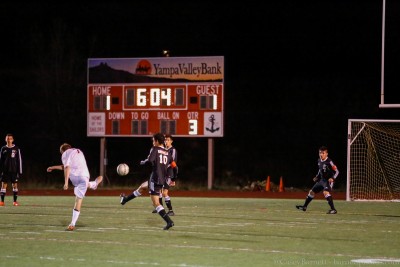 “I felt pretty confident. I’ve done it a few other times. I did it twice last year,” Salyer said. “I didn’t really think I was going to shoot it, originally. But I looked up, and the keeper was on one side of the goal completely. And Jackson Draper behind me told me to shoot it.”

Salyer did as told, his free kick from 30 yards out sailing over a wall of defenders and into the far corner of the goal to give the SSHS boys’ soccer team a 2-1 win over Eagle Valley on Thursday at Gardner Field in Steamboat.

“It was very heads up, obviously, from Jack,” Steamboat coach Rob Bohlmann said. “Jack saw them setting up the wall and he was opportunistic. And Jack can hit the ball well, so boom. It was awesome.”

With the top of the Western Slope on the line, both teams entering the contest with only one league loss each, there was no surprise about the equality of the game. And considering the recent history — the teams split two games last season, with Eagle Valley winning 3-2 in overtime in Gypsum — the testiness of the game was expected.

After 34 minutes of back-and-forth action, the Devils took a 1-0 lead on a goal by Paco Serna. Another Eagle Valley player sent the ball toward the net from near midfield and had the ball bounce off the cross bar, leaving SSHS goalie Andrew McCawley out of position to stop Serna’s put back.

Facing a goal deficit, the Sailors responded with the equalizer in the 39th minute, when Salyer’s cross found senior Charlie Beurskens for an easy knock in to send the teams to half tied at a goal each.

“When I was running down the line, I just looked up and saw Charlie far post, slid it across, and he finished it,” Salyer said. “It gave us the confidence to keep going. I think it’s really what helped us throughout the game.”

Both teams relied on outstanding play from their goalies in the second half, with the game headed to overtime still tied 1-1. The first 10-minute overtime period netted no golden goal, and the second overtime looked to be well on its way to doing the same.

Then, with 59 seconds to go before the draw became official, Salyer’s Hail Mary struck home to give the Sailors their biggest win of the season so far.

“I look up and the keeper was not anywhere near where he was supposed to be, so I just shot it, and it went in the far side,” Salyer said. “It’s awesome. This is the best year of soccer I’ve had here, and I’m a senior. It’s just pretty exciting.”

The win sends the Sailors to 6-1 this season, 5-1 in Western Slope league play, and jumps them over Eagle Valley in the standings. SSHS and Battle Mountain are tied for first with a league loss each. The Devils fell to 7-2, 4-2, with the loss.

Steamboat has a day off Friday before hosting 4A powerhouse Palmer Ridge at 11 a.m. Saturday in a non-league game. Palmer Ridge is 3-3 and coming off a 1-0 win at Pueblo West on Thursday.

Story Originally published in the Steamboat Today and written by Austin Colbert.