The Steamboat Springs High School girls soccer team collected the squad’s fourth-straight win of the season at Gardner Field on Saturday knocking off the Palisade Bulldogs 4-0. 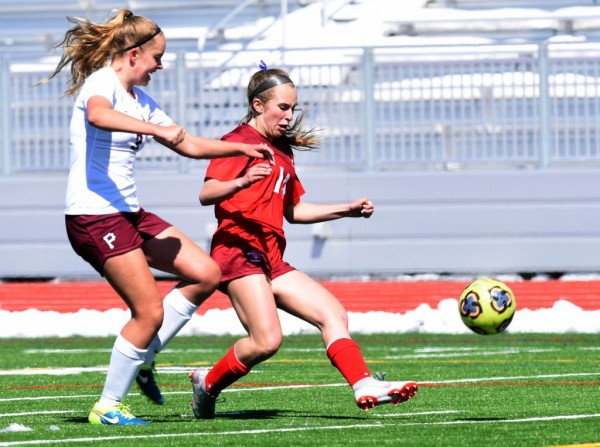 Steamboat Springs High School junior Casey Buchanan fires a shot into the back of the net Saturday during the Sailors 4-0 win over the Palisade Bulldogs at Gardner Field. (Photo by John F. Russell)

“It’s a great result,” Steamboat coach Rob Bohlmann said. “The consistency and the response from starting out the season 0-2 has been tremendous. We just focused on what was in our control and getting better. That consistency has been there all season, and if you look at Game 1 to this game, we are getting a little better and a little stronger every day.”

The Sailors, who opened the season with a 5-0 loss to Colorado Academy and a 2-0 loss to Battle Mountain, have rebounded in the past four games. Steamboat has chalked up wins against Aspen, Centaurus, Summit and now Palisade to improve to 4-2 for the season. During that stretch the Sailors have outscored their opponents 18-5.

On the other side of the field the Palisade Bulldogs are struggling to find the team’s stride in 2019 with losses to Glenwood Springs, Delta and now Steamboat.

The team lost 11 seniors from last year’s team including offensive powerhouses forward Sami Feller and midfielder Lexi Newton. Feller now plays at the University of Denver where she is a rising star, and Newton is at Colorado Mesa University.

On Saturday, the Sailors got things started with a goal from senior Rachelle Koly who scored just four minutes into the contest after being set up by teammate Delaney Moon, who is also a senior. Then a few minutes later Koly returned the favor when she set up junior teammate Casey Buchanan with a pass that split the Palisade defense. Buchanan took one touch before sending the ball to the back of the net with her weak foot.

“Lately we have been working a lot on finding our center forward and splitting the defense, and that’s exactly what we did,” Buchanan said. “I got it just outside the 18, took a touch and finished. It felt great because, first of all, it was a lefty, and I’ve never gotten a lefty goal. I also, as an outside defensive (back), I don’t usually score, and it was pretty special. I want to keep doing it.”

A penalty just outside the Palisade 18 gave Steamboat Springs senior Lucy Wilson the opportunity to make the score 3-0 just before the end of the first half. She cashed in putting the shot just out of reach of the Bulldog goalkeeper at the 37 minute mark.

Then in the second half, Wilson scored the Sailors fourth and final goal of the game after getting a nice through ball from Moon. Wilson outran the Bulldogs defensive backs en route to netting her second goal of the game.

After the game the Sailors coach said he was thrilled with the team’s current four-game run, and even more impressed with the way the team is coming together.

“The greatest thing is everybody is working for each other,” Bohlmann said. “You can see that as far as the stats go. There is really a good mix with who is creating those goals, and who is finishing those goals.”

The Sailors will be looking to extend the streak this week with a game against Glenwood Springs at 6 p.m. Thursday at Gardner Field.

The Demons are 2-1 this season with shutout wins over Palisade and Summit and an overtime loss to Montrose. Glenwood will play Eagle Valley on Tuesday.

Then, on Saturday the Sailors will head to Summit for another meeting with the Tigers. Summit is 1-4 this season with the team’s only win coming against Rifle. 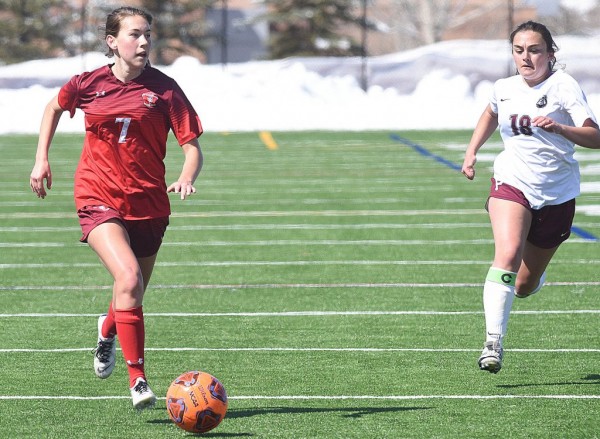 Steamboat Springs senior Megan Salyer makes a run on goal in the first half of Saturday’s game against Palisade at Gardner Field. The Sailors won the game 4-0, extending the team’s current winning streak to four games. It was the first time in two years that the Sailors have beaten the Bulldogs. (Photo by John F. Russell)