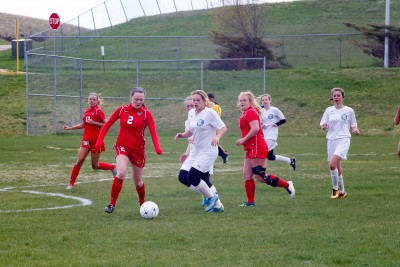 Craig — The Moffat County and Steamboat Springs high school girls soccer teams have had drastically different seasons this year, and though it was an effort to get the two schools together after two postponements, the rivalry game was one full of energy.

The Sailors took a 10-0 win while in Craig Wednesday in a game that Steamboat girls eventually commandeered but not without an early resistance by the Bulldogs.

MCHS coach Harry Tripp said the first 10 minutes of the game were by far the best for his players as they shut down the outside passing lanes for their opponents and forced the Sailors to really work to get their offense going.

However, once Steamboat got its first goal — a long, arcing shot by Jordan Floyd that sailed just beyond Moffat County goalie Jennifer Aguirre’s reach six minutes into the game — the momentum was immediate, as Floyd quickly gained a hat trick before any of her teammates even had any points on the board, though goals by Tess Richie, Lindsey Anderson and Ellese Lupori soon followed to make it 6-0 at halftime.

Hannah Walker, the Bulldogs’ usual keeper, spent the first half at midfield but was back in the box for the second, coach Tripp sending his athletes back onto the field with the objective of tightening up their defense on the edges and otherwise.

“Shut ‘em down,” he instructed his players.

Again it started off well but again the Sailors began to wear down the Bulldogs, starting with Floyd charging in for another score and shortly thereafter setting up Logan Sankey to do the same, while Natalie Bohlmann picked up two goals of her own to send the lead into double digits.

Walker earned eight saves and Aguirre 10 for the Bulldogs, while Ocoee Wilson had two saves for Steamboat. Floyd led the Sailors with four goals and one assist.

Sailors coach Rob Bohlmann said the squad needed the game to “find their rhythm” again, the match their first since April 12, players coming off spring break.

“We were highly motivated, really eager to play, and it showed well,” he said. “Our girls did a great job of moving the ball, and when you get that quick ball movement, it’s difficult to defend.”

Steamboat is now 10-1 overall and looks to maintain its pristine 8-0 record in the 4A Western Slope League with back-to-back conference games Friday against Palisade and Delta, both at home, the next week meeting Battle Mountain and Eagle Valley, with a likely league championship and a playoff berth that’s all but certain.

Original Story by Andy Bockelman of the Craig Daily Press.