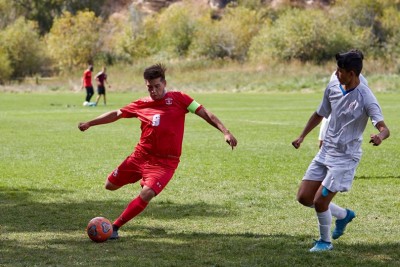 The natural grass at Dudley Field at Emerald park has been good to the Sailors in their first two home games of the season. While Gardner Field is in the finishing stages of upgrades to the stands and track, the Sailors have taken to their familiar club turf at Dudley. Saturday was a big challenge for the Sailors, taking on the current #1 team, Centaurus High School.

The first half saw three goals, and the Sailors trailing 2-1, with senior Murphy Bohlmann scoring the first goal unassisted. Junior Kevin Kaster tied things up in the second half off an assist by senior Riley Moore making it 2-2. Moore set up one more goal by senior Quinn Connell to grab the win 3-2.

“The big part to the success today was how organized our team was defensively,” head coach Rob Bohlmann said. “They did a nice job shutting down the counter attacks from their opponent.”

The Sailors are back in action Tuesday. They will take on league opponent Eagle Valley (0-3) at Hot Stuff Stadium in Eagle at 6pm.