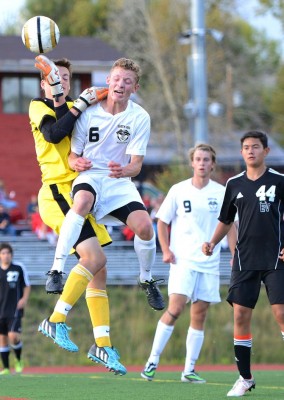 Photo by Joel Reichenberger
Buy a print of this
Steamboat’s Charlie Beurskens and Eagle Valley’s Colin Rouaud collide near the goal Tuesday. The Sailors didn’t score on that opportunity, but they did put away two others to win the game, 2-0.

Jake Salyer scored his first goal of the season in the first half of the Sailors win Over Eagle Valley on Tuesday night. The goal would prove to be the deciding goal in the 2-0 victory. Nathan DePuy found the back of the net in the second have to give the Sailors some breathing room in the game.

Steamboat is now holding strong to second place in the 4A Western Slope Conference  and will face off at home against Glenwood Springs Saturday at 11am.