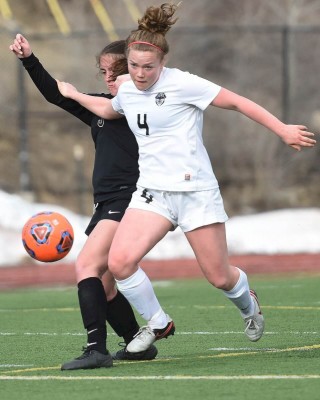 Tuesday afternoon, the Sailors cleared that hurdle not by inches, but by feet, out kicking and out playing rival Battle Mountain to deliver a crushing 5-0 defeat in Steamboat Springs.

The win snaps a six-game winning streak in the series for the Huskies and gives the Sailors a crucial early leg-up in the race for the Western Slope League championship.

“That’s one of the most special wins we’ve ever had,” senior Jordi Floyd said. “We’ve been waiting for that since freshman year.”

It proved an especially sweet night for Floyd and the rest of Steamboat’s seniors, who had never beaten Battle Mountain. The Huskies won the head-to-head matchup three times last year, including in two overtime games, one of which stretched to double overtime and came in the state playoffs, ending Steamboat’s season.

Tuesday, those seniors played a huge role in ensuring they’d graduate with at least one win in the series.

Senior Mackenzie Gansmann netted the Sailors’ first two scores. She shot it home into an open net after the Huskies’ keeper deflected a shot and was out of position for the rebound, making it 1-0 three minutes in. Her second was a looping shot from 20-yards out.

Two more seniors helped make it 3-0 in the waning minutes of the first half. Natalie Bohlmann crossed it to Floyd, who was just waiting in front of the goal.

“I knew if I could get any part of my body on it, it would go in,” Floyd said.

It did, giving Steamboat a huge cushion heading into the second half.

Yet another senior proved at least as essential.

Goalie Ocoee Wilson was as resolute and effective as a rock wall.

She had one diving save early that kept Battle Mountain from quickly answering Steamboat’s first goal, a shot that could have changed the entire complexion of the game.

Another well-timed leap prevented a goal in the second half, and Wilson later saved a penalty kick.

Even when she wasn’t able to haul in one second-half shot, she deflected it and, on her hands and knees, beat all opponents to the rebound in a moment that defined her performance throughout the game: one spectacular step ahead.

“She was outstanding today,” Battle Mountain coach Dave Cope said. “She’s a great goalkeeper, and full credit to her. In those two overtime games last year, she was the reason they were even in overtime.”

It amounted to Steamboat’s third shutout in five games this season.

The Sailors, 5-0, racked up two more goals in the second half, both from the foot of freshman Delaney Moon.

By the time the second rolled in, the Huskies were focused on finishing with pride and Steamboat with grace.

“We hadn’t played a team yet that put us under physical pressure, so hopefully, this will help us; we’ll learn from it and still compete for the league title,” Cope said. “That’s the important thing for our group, to realize that’s not gone.”

The season’s only barely started, and the race for that league crown — three consecutive years now resting on the Huskies’ heads — has only just begun. The teams meet again April 15, and both sides are already considering that day, hoping for revenge or validation.

The loss was the first in the league for Battle Mountain since April, 2014, two years and 20 games. Whether the balance of power will shift this season remains to be seen, but for one day in Steamboat, the Sailors were simply thrilled to have leapt over a hurdle that’s tripped them so often in recent seasons.

“We’ve been working so hard, and this is what we’ve been looking forward to,” Bohlmann said. “We’ve always had this goal, to get first in our league. We want to beat them both times. … They’re definitely going to bring it next time.”