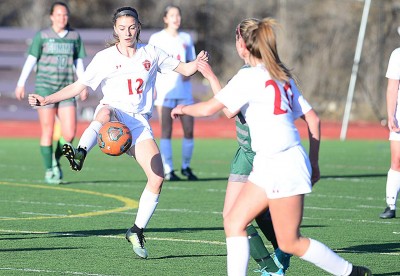 Steamboat Springs sophomore Sophie Leeson controls a pass from a teammate in the first half of Tuesday night’s soccer game against Summit at Gardner Field. The Sailors fell behind early after a Summit corner kick ended up in the back of the goal But the Sailors answered with the next three goals to secure a 3-1 victory.
Photo by John F Russell

“This is a great opportunity to measure ourselves because we are on an even slate. You turn around and play the same opponent 72 hours later with the same recovery time for both teams,” Sailors coach Rob Bohlmann said. “The key takeaways from this game is the depth of this group, and the support they have for each other is profound.”

He said a terrific sliding save by Eden Reece at the end of the first half was a turning point, and he also pointed to the Sailors two second-half goals as the key to the win.

Bohlmann added the Sailors didn’t make any radical changes in the game plan after playing Summit in Summit County just three days ago. That was also a hard-fought game with the Sailors coming out on the winning side of a 3-1 score. The team made a few changes in an attempt to improve it’s goal kicks — something that Bohlmann said the team struggled with in last Saturday’s game.

On Tuesday, Steamboat came out on top of a 3-1 game despite giving up a goal in the opening eight minutes of the contest and facing a relentless Summit attack. Summit had 13 shots with six on goal. They also had five corner kicks in the first half.

In fact, Summit’s first goal came on a corner kick off the foot of senior Tanner McCann. The ball deflected off of a Steamboat defender attempting to clear the shot but ended up in the back of the goal to give the visiting team 1-0 lead eight minutes into the game.

The next goal also came on a set piece, but this time, it was Steamboat’s turn. Sailors Delaney Moon fired the ball into the box, and it ricocheted off a player into the front of the goal before Steamboat’s Sophie Leeson was able to head the ball past the Summit keeper for the game-tying score.

Summit did get a breakaway with less than two minutes remaining in the half, but the Steamboat goalkeeper Eden Reece made a sliding save to stop the goal. She left the game after taking a shot to the head but was cleared to return in the second half.

Steamboat took it’s first lead of the game at the 55-minute mark in the second half when Teagan Ludwick knocked a Moon cross into the back of the net to make the score 2-1. Steamboat then appeared to close the door on the game in the 73rd minute when Moon scored after getting a pass from Kelly Petix, making the score 3-1.

Summit did have one last opportunity the climb back into the game in the closing minutes after the Sailors committed a foul just outside the penalty box. The free kick, however, missed it’s mark, flying over the top of the goal.

The Sailors will have a few days to recover before traveling to Gypsum this Saturday to take on Eagle Valley. The Devils beat Vail Mountain on Saturday to improve to 3-3 overall this season. The team is 2-2 in league with wins over Rifle (10-0) and Summit (3-1).